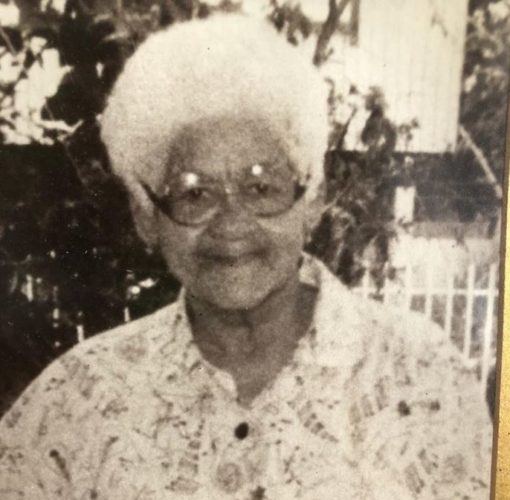 This is my great grandma, Maria. I know I met her as a very young child. Sadly, since I was such a young child I have no active memories of her. That breaks my heart, when I look at this picture, I see portions of my mother, and I wish that I could remember this lovely looking woman.

The only thing I remember is her being in the living room of a small wooden house in Puerto Rico. She was laying down on a sofa and I can vaguely remember seeing her toe sticking up. She was slightly darker than me, but I can remember the color of her toe was slightly lighter. But that’s all I got in terms of memories with her.

It makes me really sad that I never had a relationship with the people who raised my parents or their siblings. I say that because I know for a fact that my mom was raised by this woman, her grandmother Maria. She was not raised by her actual mom.

I have absolutely zero recollections of my grandmother. The only thing I recall is a picture we have of her, she’s wearing either a light blue or green t-shirt. Its the only picture and consequently the only memory I have of her.

The only other thing I remember about my grandma is how sad my mom was when she passed away. We were still living in Walton Avenue in the Bronx and my mom took a trip to Puerto Rico to bury her. That’s all I have of my grandmother.

I remember feeling some resentment. I don’t think I’ve ever addressed it, but I remember thinking to myself that I felt no pain or sadness due to her dying. I never met her, she never sought me out, I feel nothing for her. Resentment, and now she’s dead, there’s no way to change things. I never had a grandma, resentment. Bury it, move on, there’s not point giving it a second thought, she’s dead.

I also recall wondering why my mom cared, since she didn’t raise her. But I know now that it runs deeper than that, much deeper. These were the thoughts of an 8 year old child. Today I understand why it hurt her, but I also understand why 8 year old me didn’t care about her passing. How could I love or miss someone I never knew? Though in hindsight, I really do wish I met my grandma.

Over the years of my youth, I met a few of my uncles from my mom’s side. Most of them are dead now due to drugs, jail or some other tragedy. The saddest one was my Tio Cai, I actually had a relationship with him. He used to take me to the roof and teach me karate.

Of all my uncles, he’s the one who came to NYC from PR most often, and he’s the only one I cried for when he died. He was killed in a car wreck. The others, I can’t really remember much, and we only met in passing. Mama bear told me that she kept them at a distance due to her own reasons that I won’t share here.

I also had met one aunt from my dad’s side, Titi Clarita. She was a sweet older lady who had a house in Newark, New Jersey. We used to go up there to visit her often. She had a yard with a pool and a lot of kittens. I remember sitting on a beach chair with about 5 kittens on top of me playing. Her husband Uki was a cool dude too, crazy ass old school Puerto Rican man!

Though I don’t have an active relationship with them, her sons, my cousins, those were some cool dudes too. I think my cousin Joe was the first gay man I ever met. He made me my first ever Madonna mix tape, that was dope. His brother Elbin was married to a beautiful woman who turned out to be a problem for him later on. I was sad when Clarita and Uki passed. I also felt it when Davy, their dog died. He was awesome. She had full grown cats, those I didn’t care for, they scared the crap out of me while I was asleep.

Anyway, my youngest sister went to Puerto Rico with my mom, and she sent me this picture of my great grandma. It’s the first time I’ve laid eyes on her since I was a very young child. I know that I must subconsciously remember her cause when I saw this picture the first time I was on the verge of tears.

I don’t remember you my viejita, and you are long gone from this world, but I know that I feel love for you. Your face, your tender, gentle smile, your entire being, it moves me very much. Perhaps I’ll meet you on the other side? Rest in peace.