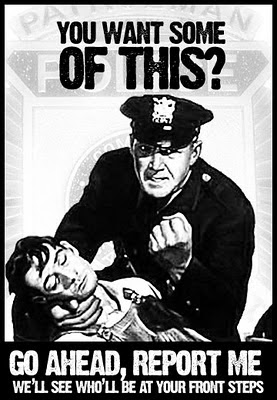 “Fuck the police”, a common term frequently heard in the inner city, many rap songs (Fat Joe seems to be fond of this phrase), and casual conversations on occasion.

By now we should have all come to realize one thing about this, people that say “Fuck the police” are usually people that are up to no good! They are just mad because they got caught by the cops while committing a crime.

I had issues with the police from time to time as a teenager, and guess what? Most of the times it happened I WAS UP TO NO GOOD! Was I mad at these men and women for doing there job? No, never, I knew that they were chasing us because we were in the process of committing a crime in some way, shape, or form. It wasn’t personal.

Let’s examine the transgressions I was enacting against society whenever I encountered the police as a teen:

1) Vandalizing private and or public property with our sub par artistic skills.

2) Hanging out in parks when we belonged in school.

4) Hanging on the back of the public bus.

5) Though I wasn’t selling and just greeting friends, a few times I was up against the wall with known drug dealers in the street corner.

6) I was involved in a dispute between my homeboy Latin king friends and some black dudes in the Tremont section of the Bronx. It got ugly.

There were other little things here and there, but you get the point. A reasonable person doesn’t blame the police for doing their job. If you are involved in stupid things, then expect to encounter the consequences for those actions. I have never said “Fack the police”.

Though I believe there are real cases where police can abuse their power, (I have experienced those too) overall the people complaining about the police need to accept responsibility for their actions! Instead of saying “Fack the police”, you should say “Fack me and my stupid behavior”.

This is real talk right here. Rather than resist and try to justify why you were specifically picked on, think good and hard about why you hate the police. If you are not engaged in criminal or suspect activity then most of the time the cops should leave you alone.

I remember that bus incident. My mom nearly disowned you lol. You were one crazy sweet kid! Glad you outgrew it. And yes, most of the time, when I think I’ll of officers it’s because I want to go 75 on a 50. VROOM!

RT @Angel Rodriguez: The ones who say “Fuck the police.”

The ones who say “Fuck the police.”