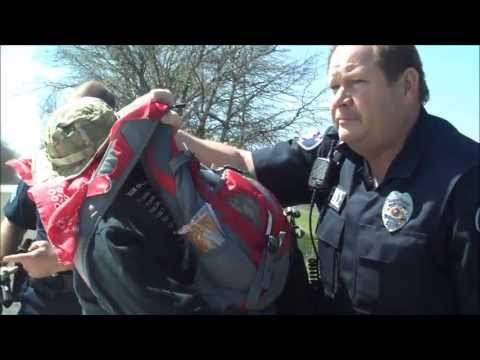 Last week, when I wrote a piece about Army Master Sergeant C. J. Grisham, a U.S soldier and how Temple, Texas police illegally detained him and took his legal weapons from him, all the Liberals came on the attack. They were conveniently siding with police.  All of a sudden they were magically saying things like: “You have to obey the police. He was being disrespectful and talking too much”.

Meanwhile anyone that saw this video knows that this man was calm and speaking only about his rights and how they were being violated. He did not resist and he did not attack the police.

I present to you those same liberal types here in NYC reacting to the police arresting a man that was accused of robbery and a hate crime. “Stop, leave him alone. He didn’t do anything”.  In this alternate scenario they are now conveniently positioned against the police. You get the usual “F the police”, they put their hands on the officers, and some even outright attack the cops.

All the police hate comes forth in all its glory. The true colors show, you know, because this is different, right? This is happening to a minority and involves an actual crime. As opposed to the Texas scenario which involved a white man and his 2nd amendment rights with no real crime being committed. This makes perfect sense to me.

Supporting the police applies to liberals only when it benefits their causes, but when it does not benefit them the same rules do not apply. Just like the liberal mass media, the general liberal populous is full of hypocrites when it comes to matters like this.

I am thankful that the situation in the video did not escalate beyond what it did.

This post was originally featured on Clashdaily.com
Read more at http://clashdaily.com/2013/04/liberal-hypocrisy-when-it-comes-to-the-police/#kiyvh7UZv780PE8k.99