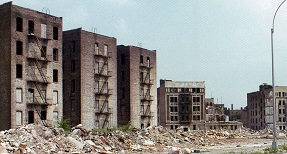 NYCTalking’s latest segment, “From the blog.” Here I will share blog posts and sometimes expand on the ideas present there. On this one we’ll talk about what it is really like living in NYC.

“He’s from the other side of the tracks.” I’m sure you’ve heard this saying before, it means that depending on which side of the tracks you live, the way you live can differ greatly, generally based on financial resources.

New York City is very much one of those cities, though not in the literal sense. Our “tracks” are big city blocks, avenues, bus and train stops.

It is a place where you could be sitting in a fancy, high end restaurant while there is someone sleeping outside just ten paces away.

New York City is a place where a man who lives in a poor, rat infested apartment can put on a nice suit and spend the day receiving packages while opening the door for the city’s elite.

In New York City you can live in one of the fanciest, most expensive neighborhoods, then cross one street and be right in the middle of what we colloquially call the hood.

They say if you can make it here, you can make it anywhere. I’m not sure how true that is. New York City never sleeps! That means that there is an abundance of employment opportunity in the city’s vast array of 24 hour operations. I don’t know that this much opportunity exists in a small country town.

Though the sentiment behind that statement is that the city makes you so tough that you can survive anywhere. I think this is true for those of us who come from the tough areas of the city. I’m not sure if the elite could do the same without the power and influence that money buys. They would likely lack the street smarts necessary to make it through without their money. Though I’d argue that our elite are more equipped to survive than the elite from softer places.

New York City is a great place, but it is much greater for some than it is for others. I have been living in New York City pretty much my whole life and I’ve lived on both sides of the spectrum. I’ve been very poor and not so poor. Never wealthy, but comfortable. I can attest to the huge differences in quality of life depending on where you stand at any moment in time.