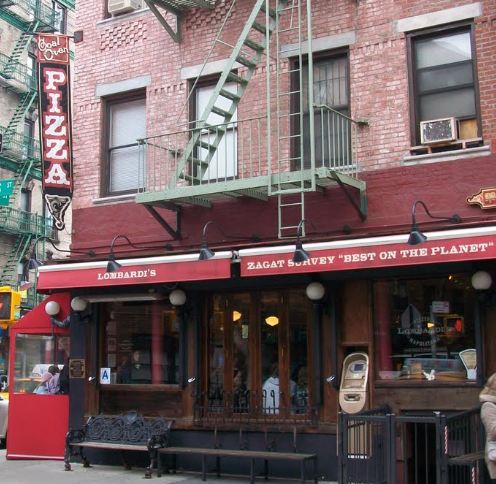 Anyone that knows me knows that I love pizza. I prowl the city streets of NYC in search of the best pizza the city has to offer. Over the years I have been to many pizza spots, and obviously some were better than others.

A few of my friends came in from Boston and suggested that we try Lombardi’s. One of them happens to be a former New Yorker, a Bronx bred New Yorker at that! However, she’s been acting very much like a tourist lately. No offense to my tourist friends, of course.

Generally, locals tend to avoid these tourist traps, its just not our thing to stand around for long periods of time to try overrated food, or shows, or anything for that matter. But this is a life long friend, someone I love dearly, so if she wants Lombardi’s, no matter how misguided her intentions may be, then Lombardi’s it is. Her step dad saw it on tv, he recommended it, she wants it. What can I say? Thanks J? LOL.

Lombardi’s claims the title of the first pizza shop in NYC, that is according to their website, and a plaque in front of the shop. I’m not sure how legit that claim is, but who really cares? I just wanted to know if the pizza was as good as they say or not. I think it is pretty cool if you were the first pizza shop in NYC, but you know how it goes! What have you done for me lately, are you still as good as you were back then?

The place was packed, inside and outside. There is no getting around it, there is quite a wait to come in here. We waited about 20 minutes, and my friends were actually there before me waiting. We expected this though, and I enjoyed chatting with the crew.

So is it worth all the hype?

We started with some salads for the table, I had a Caesar salad, my friend had a vinaigrette salad. She and her hubby seemed to enjoy the salad, me and my friend’s daughter were not very impressed with the Caesar salad. My wife seemed to like it though. My critique is that there wasn’t enough dressing to make the salad moist or tasty. Also there was too much of the lettuce’s hard spine material and not enough leaves. You know what I’m talking about, that crap ain’t the tastiest part of the lettuce! I asked my friend’s daughter to tell me what she thought of the salad, she said the same thing, too dry for her taste. Ah yeahhhh, she’s going to grow up into a fine Nyctalking Caesar salad critic one day. Lol.

What about that pizza? Well, I think the ingredients are good quality. If they were not, I would have gotten a bad migraine headache, as I often get if I eat low quality food. It wasn’t oily pizza, and that’s always a good sign. Also, I ate quite a good deal of the pizza. This was definitely my #cyao #cookyourassoff cheat day and I went to town! I figure if you are going to go, go hard. Oddly enough, the next day when I checked in with my trainer, I was down 2 pounds of fat and up one pound of muscle! Yeah, go pizza! LOL.

The pizza was “aight,” know what I’m saying? It was “aight.” There really was nothing particularly exceptional about this place, it was “aight.” The sauce on the margherita really had good potential, it has the makings of great flavor, but it seemed a bit watered down to me. I questioned my wife, and my pupil (my friend’s daughter) and they said the same thing, they felt that the sauce was watered down.

We had a few pies, the other one I ate from was the one with red peppers and garlic spinach on it. I’ll say that this one was much, much better. I think the peppers really brought out the flavor in the sauce, there was a huge difference between this and the margherita in terms of flavor profile! This is the one I ate most of, it was really good. Those peppers man, they really, really made the difference.

For drinks, aside from the water for the table, we had the Italian soda. Seltzer water with either vanilla or raspberry topped with whipped cream and a cherry. I went with the raspberry flavored one, it was okay, nothing exceptional or outstanding about this drink.

So, do I recommend the place? Sure why not. I’m not head over heals in love with the place, but I can recommend that you get that pepper pizza, it was good. Come prepared to invest some time on the wait, and then you can enjoy the oldest pizza place in NYC.

[…] was good, but they put a bit too much of it on the salad. It’s funny, some places use too little, and some use too much. I’m gonna go Goldilocks on these Caesar […]