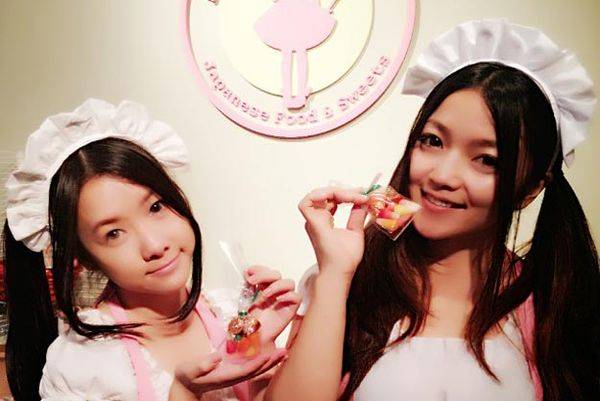 [rating:4] The spot was a solid 3, but Eri made the place that much more awesome! So we add an extra star for that!

You know how they say that people make up a place, that it’s not necessarily about the place itself, but about the people there? Well, if that is true, this place is all about Eri Ko, and to a lesser degree Hitomi and Reni.

The first impression I got from across the street as I examined the location was that this place was much smaller than the web and marketing leads you to believe. But all the same I wanted to try out the food and check out the atmosphere.

If you recall I expressed an interest in checking out this place last year. I was curious about everything that I read in terms of what it was like. An anime themed cafe in New York City? I definitely gotta check this out! Anyone that knows me, knows that I am a fan of anime and cosplay.

Though I am not a cosplayer, and I don’t follow anime as religiously as others may, I’m definitely a fan. I have a lifetime membership to ani-freak, and I do enjoy it very much! One of my favorite anime series, that had the most emotional impact on me was Tsukihime! Man, I totally fell in love with Arcueid! Lol. I can totally understand how a person that doesn’t live in the real world could become obsessed and fall in love with some of these characters. The Japanese artists are very good at making them extremely lovable and likable characters. Actually I love Rosario Vampire’s “Moka-San” so much, that I named my first ever handgun after her! Now to a gun guy, you know that this is a huge honor! My first shotgun will be named after one of my other favorite female anime characters when she arrives next week. Orihime, Saya, and a few others are in the running. But I digress!

In any case, much to my relief, when I arrived here, it wasn’t awkward and uncomfortable. Sure, the girls are cute and nice, and they do greet you with some sweet words, but it wasn’t over done. My guess is that since it was a relatively quiet night, the very few people that were working were far too busy actually working to over play the “May I help you master” game that is advertised. But that was fine with me, I’d be uncomfortable with someone overdoing it. Lol.

It’s funny, as my station in life improves, and I go to places where people recognize me, or attend an event where someone, be it a PR person, or a promoter introduces me and says “This is Angel, please take care of this guy,” people are much nicer to me. Sometimes too nice, uncomfortably so. I’m from the ghetto man, I didn’t grow up with much, and I’ve mostly always done everything for myself. I’m not used to people catering to me and trying to please me.

This was most apparent to me during the shooting of my network tv show.  I had someone following me around and powdering my face all day. When I was hot and getting sweaty, (it was hot as balls in the studio, we had AC trouble during the dead of summer AND I was eating spicy food) one of the cute assistants was tasked with blow drying my shirt as it became moist. That made me very uncomfortable, I felt bad and I offered to do it myself, but she insisted it was ok.

Anyway I’ll save those specific details for when I eventually write about my experience on the show, but let it suffice to say that I’m not used to having people all over me. Though honestly, I can probably get used to that. Hahah!! But I digress yet again! Gosh, I’m a notorious digressor aren’t I? I think I just made up that word by the way, so use it with caution! So yeah, I’m not very comfortable with people being all over me, so it was a bit of a relief that I was given some space here.

The first person I actually met after placing my food order was Eri. Even before I arrived at the Maid Cafe, I had already spoken to Eri a few times online. She was always very helpful and kind in answering my never ending questions about the open mic, and the cafe in general. After arriving, it was clear that Eri is the go to person here. Thanks to Hitomi for connecting me to her!

The open mic was relatively quiet, if you recall this was that evening when it was FREEZING! Record breaking cold! This was during the POLAR BEAR VOLDERMORT! Basically it was me, a few of the staff, and like 4 other brave individuals that took part of the open mic. The rest were just spectators. I think I did about 8 of my songs this night! Lol. It was my first, unofficial live concert! Hahah. It was interesting, usually when I perform, the crowd is there specifically to watch me, and whomever else may be performing. The majority of the spectators here were just present to eat their food, or drink their bubble tea, they didn’t give a crap about me or my music. This was not the typical open mic or show crowd that many of us performing artists are used to. This was cool though, it provided for an ego check, and also to develop the necessary experience required to perform and attempt to capture an audience that has zero interest in your work. My friend, an amazing artist, Edwin Vazquez taught me that whether you are performing for one person, or 1,000 people, that you should always give them the same intense and powerful performance! So when I went on stage, I closed my eyes, listened to my track, and poured it on hard!

Throughout the evening, as we sat next to each other, I was able to chat and joke around with Eri, she is pretty awesome at what she does, and she really solidified this as a cool evening for me. A couple of the other folks interacted with me, some did cute little “meows” here and there, but Eri is definitely the person that made this a great event for me. So, whoever hired her, great pick, now give her a raise or a bonus! She has earned it!

On to the food! You know, I went to Japan for vacation nearly a decade ago. I was much younger and inexperienced in everything. Some would say I am still inexperienced, but I have grown significantly since then. My palate wasn’t very evolved back in those days. All I ate while I was out there was a dish that consisted of rice and beef.  This was what I decided to have here, it’s called the Doki Doki beef bowl combo. The dish came with a Miso soup and a salad, neither of which I ate much from. LOL. I love miso soup, but it is usually salty, so I have only small amounts, and I didn’t really feel like eating salad.

I liked the beef bowl, it was similar to what I remember eating during my trip to Tokyo and Nikko back in 2004. The dish was not out of this world, I mean I wasn’t floored by it, but it was pretty damn good, and I would eat it again. Most importantly, I got no headache after eating here! I also had a lychee bubble tea and several hours later a lychee smoothie. Both drinks were pretty good, tasty and satisfying.

I plan to return here again, I’d like to check out the open mic on a regular night, and I’d like to try more of the menu here. If you are in the Canal Street area, this is definitely a place that is totally worth checking out.

Eri Ko, you deserve a raise! You definitely made this place for me! Props!

Fun reading your review, I’ve been thinking of checking this place out!:-)

Yeah. Tonight they have an open mic. I am considering going, but I’m a bit sick and kind of tired. Also doing a couple of write ups I’d like to finish.

I think you would enjoy the food. If you want to come to an open mic, let me know, I’d love to entertain you.

[…] places to perform at all the time. Most recently I discovered an anime themed Japanese cafe, Maid Cafe. Last week I went there and I had like a mini concert on the open mic. It was quiet, so I was able […]