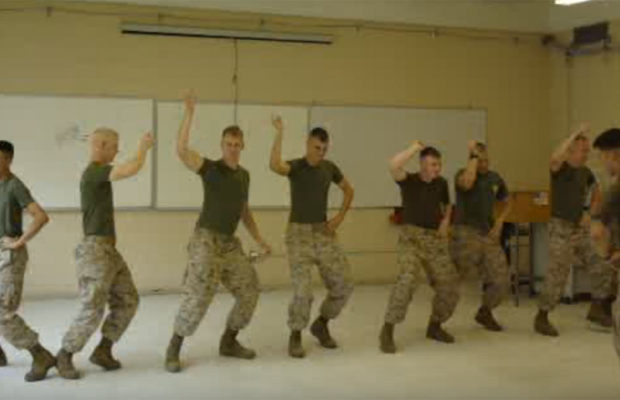 I remember one year during Fleet week, all the Navy boys came to the city, as usual they go out and party in their uniforms. The Navy always has a Marine detachment aboard the ship, so those boys also come out to party. Then you have the stragglers trying to get down with fleet week, Army, Air Force and Coast Guard dudes who happen to be around and come out in their uniforms to party as well.

I was at Webster Hall, and wearing my Air Force uniform, trying to be down. This girl was talking to me, and I was being friendly. I was not interested in her romantically, but she seemed to fancy me. We chatted for awhile, then a group of Marines came over. The leader of the bunch, a lance corporal jumps into the conversation. Yup, this is where is starts with that Marine at Webster Hall.

As is normal among the branches, he starts to take jabs at the Air Force while attempting to impress the girl. “Don’t you want someone who can fight? Why are you talking to this flyboy?” The girl then looks at me, “Aren’t you going to defend your branch?” I smiled and asked, “What exactly do you expect me to do?” She looks appalled, “Defend your branch!”

I shook my head, and I smiled again. She looked at me confused so I replied, “Look, this guy is trying to get laid, you are simply a target that he is trying to impress. He’s so insecure that his ego is established by his uniform, he needs to impress you by acting like a tough guy. The thing is, that tough guys don’t need to say they are tough, they just are.”

His boys all start to laugh, and he nods at me and says something along the lines of, “He’s got some fight in him.”

I continued, “I’m wearing a different uniform, one that does not engage in ground combat often, but ask this kid who he’d need to bail him out of a tough spot in a war zone! Anyway, this young man (I was being condescending) makes the assumption that I cannot fight based on my uniform. He doesn’t know where I come from, he doesn’t know about the multiple black belts that I have in martial arts, or how I fought golden gloves, he doesn’t know about how the streets raised me, he doesn’t know how I have been shooting guns since before he was even eligible to join the military!”

Again the fellas are laughing, “Preach brother. This Airman is going in, he street dog. You should of been a Marine!”

I wink at them, “Do you think I will allow this wanna be alpha male with his entourage to phase me? And frankly, Mam, I don’t appreciate you instigating and enabling him. I have enjoyed our conversation up until this point, but if you are buying this kid’s bullcrap, and trying to get me jumped by 5 big ass Marines, then maybe you are not worth any more of my time. Go hang with them, I’m good.”

At that point, everyone looked kind of confused. She didn’t expect that, and the guys were confused at how practical I concluded my brief speech. I was a little buzzed by the way, so even I was surprised, but the chick got offended, she motioned “freak both of y’all,” and she walked away. The dude’s with him started to laugh, and he came in and gave me a pound. He said “Ey man, no hard feelings, Atlanta in the house just trying to have a good time. That was some inter branch banter, but you got my respect.” We all laughed and I said, “No hard feelings Devil Dog, I respect you and all that you fellas do for our country. Semper fi.”

Pounds all across the board, then we went back about our business. God bless that Marine at Webster Hall.