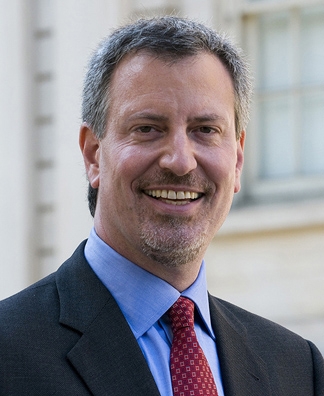 Education Forecast: What de Blasio Plans to Bring to Schools in the City
On Tuesday, November 5th, New York City elected democrat Bill de Blasio to be its next mayor. This likely came as no surprise to pollsters, who predicted that de Blasio would win by a landslide, or anyone who paid attention to the glowing endorsement he received from President Obama. Obama indicated that de Blasio will be an agent of “progressive change” in New York City, and this means that New Yorkers should expect a shift in the political landscape over the next four years. Good or bad, one of the biggest areas of change we can come to expect is in terms of education policy. This is what de Blasio has proposed, and what it might mean for New York.

Start Early, Start Often
The centerpiece of de Blasio’s proposed education plan is universal pre-kindergarten. On his website, de Blasio states that “China will enroll 70 percent of children in three years of pre-school” by 2020, and that India will also take the lead in preparing its workforce early and often. de Blasio aims to fund pre-K programs by increasing the city’s income tax for its wealthiest citizens, which would raise a projected $530 million. This revenue would also help to fund after-school programs for middle school students, a service which has been drastically scaled back over the past five years. The National Youth Violence Prevention Center has found that students who participate in after school programs are far less likely to use drugs or become a teen parent. These programs will reach these students at a critical age.

Unchartered Learning
Under Bloomberg’s mayoral control of the New York City public schools, we saw a number of school closures, an increase in the number of privately-run charter schools, and an increased emphasis on standardized testing. de Blasio questions the effectiveness of these policies , and hopes to turn struggling schools around as opposed to closing them. He wants to keep the cap on the number of charter schools open in the city, opting to open public community schools in impoverished neighborhoods. These schools, which provide increased access to public resources, have been successful in the past, though they only serve an insignificant number of students. Students will also be served by de Blasio’s plan to reduce classroom size and to recruit and retain teachers. Our schools have an issue with teacher turnover rates, and as a teacher, I can attest to the fact that more students lead to more stress and burn out. de Blasio also believes in “lowering the stakes” on standardized testing because he doesn’t believe that our schools, students, and teachers shouldn’t be evaluated according to one test.

What this Means
In addition to what I’ve already mentioned, de Blasio also hopes to maintain mandatory sex education in public schools and to ensure that all students have access to education in the arts. Arts education helps students learn to think critically and creatively, which are skills that are necessary for college and career readiness—another goal set forth by the new mayor. Over the next few years, New Yorkers can expect to see more community schools equipped to compete with privately-funded charter schools and more after school programs that will keep students out of trouble. They can also expect to see more homegrown teachers—more partnerships with CUNY and SUNY schools and more alternative paths to becoming a teacher (so that those who have taken tefl courses in New York or have their master’s degree in a particular field can teach without having to go back for yet another bachelor’s degree!) Bloomberg’s plan has been considered successful by many, but I am eager to see whether de Blasio’s changes will be received as well by our community.

Sean Lords is a family man and teacher who is currently pursuing is Master of Education. When not chained to his computer screen, he assists with tesol courses for Oxford Seminars, where he longs for his days as an ex-pat English teacher in Korea.

Soon enough Blomberg will not look so bad.