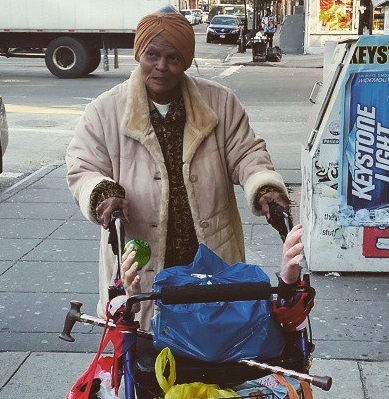 Meet Doña Carmen, a resident of Melrose since leaving her native ‪Puerto Rico‬ many decades ago.

85 years young and you can always spot her in the early morning hours running her errands. Even though she cannot walk without the aid of her walker, she does not solicit help from anyone.

For over 40 years she has spent her summers at ‘La Playita’ (Little Beach but not really a beach just stretch of tar in ‪‎HuntsPoint‬) making ‪cuchifritos‬ such as ‎rabitos, ‎alcapurrias‬, ‎rellenos de papa‬, ‎morcilla‬ and other heart clogging fried delicacies.

Eventually after La Playita began to die down after over 40 years as a hot spot, she moved much closer to home to Villa Cuernos on 156th and Brook Ave.

Both locations, once the hint of warm weather began, became places of dancing, drinking, selling trinkets and wares, but most importantly it was a celebration of culture.

Little is left from that era and Villa Cuernos in Melrose has gotten smaller and smaller as new developments have been built. Now it sits in front of the last remaining parcel of land which is slated for development and such gatherings will soon be gone.

Doña Carmen is one of our local treasures and ‪People Of The Bronx‬. The greatest resource of our borough are its people.

For more information on the history of these places, read David Gonzalez‘ article in the NYTIMES.

Image and Content shared with permission from our friends at ©welcome2thebronx.com

One of the comments I read in the thread where this post originated said the following, and we at NYCTalking agree 100%!

That’s what neighborhoods are missing nowadays. The real abuelos y abuelitas. The one we respect. As opposed to to hood rat grandma’s in their late 30’s