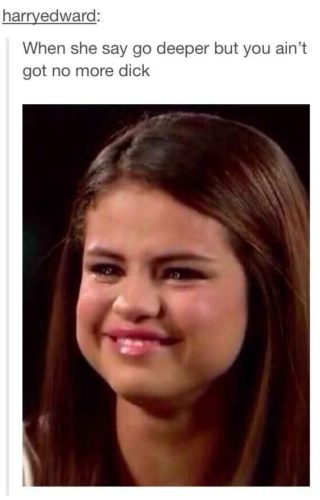 Once upon a time one of my ex girlfriends told me that I was the best lover she ever had. She said that this was the case despite the fact that I was smaller than her ex in the penile department.

When she told me that, I didn’t hear the part about how amazing a lover I was. Nope, we have selective hearing when it comes to penis critique, all I heard was “he’s bigger than you.” Many guys won’t admit it publicly due to pride and ego, but we all have insecurities. Yes dear, men included.

A couple of days ago I saw a friend of mine put up a post berating one of her friends for dating a man who had less than an 8 inch penis. “If you are happy living a frustrated, unsatisfied life, then fine. But if you want to be happy, you need a man who has at least 8, and if more than 8 inches even better.”

That may be true for her, but not for everyone. I ain’t got no 8 inch penis and some of the women I’ve been with could barely even deal with my less than 8 inches. If I had eight inches, we might have been incompatible sexually.

That post from her was a very silent post as far as men were concerned. Women shared their opinions and poked fun at those with less than 8, but the fellas didn’t say anything publicly.

Though she did tell me that some messaged her privately via the inbox. In fact, a few guys privately messaged my inbox about it once they saw me comment. LOL. Of course they won’t say it publicly, doing so would imply that they fall into the less than 8 inch department. They don’t want to out themselves as they think it’s embarrassing. Men and our fragile little egos… Anyway, I’m not ashamed to tell you that I don’t have an 8 inch dick, far from that to be honest. And if that’s not for you, I get it, you don’t have to fuck me. I’m married, so odds are you’ll never see my dick anyway. See? Easy peasy. Furthermore, with the exception of the lady mentioned above, my penis size has never been mentioned before. And despite being smaller, even she allegedly stated I was her best lover up to that point.

Anyway, I bring this up because we were talking about male insecurities, and some females think that we don’t carry any. “You guys are so lucky, you don’t have anything to worry about in life.” Well, let me tell you something, we all have insecurities. If I really wanted to, I could pick some being manifested right from the post above! Thanks to our culture and the emphasis on penis size, we have one of the most difficult insecurities to overcome, penis envy! If a woman wants to break a man, all she’s gotta do is critique his man tool. Whether we admit it or not, that will affect us.

So being that I have no problem owning my less than 8 inch penis size, I publicly commented on my friend’s wall. I stated that if I wrote anything similar to her post about a woman’s genitalia, that she as well as most of those enjoying her berating post about men would probably react very differently. Mind you, this is a woman who takes offense if a man sends her an inbox message saying “Hello, we should meet.” Which lets you know that she’s all about respect and so on. Which is cool, I’m on-board with all that. But it also shows that we can all be hypocritical in our behavior.

On one hand you want to be respected, which we all deserve and should have. On the other hand you are putting down and attacking a friend who dates men with less than 8 inch penises. When I commented on it, she brought up history and how men have all abused women forever, and how all of a sudden we are sensitive? Okay, I see.  At that point I bowed out of what I perceived would become a pointless back and forth debate. At the end of the day, it’s plain old hypocrisy. Point blank, plain and simple.

Imagine if men said something like that on social media. Anyway, yes, men have insecurities. They just don’t dare to talk about them due to pride and ego. Well, I’ll say it on behalf of those men, I’ll take the mockery and insults for you. Yes, we do have insecurities, most will just never show or admit them to you, but they are there. We are all insecure about something, regardless of how perfect we present.