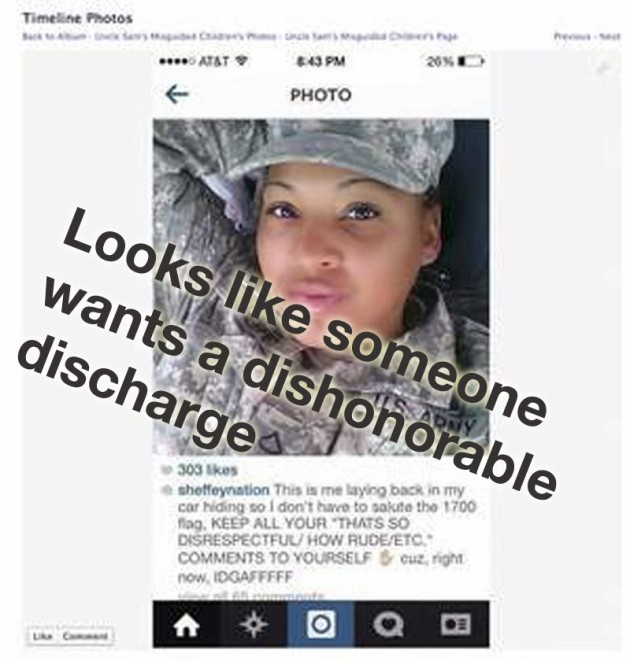 Today I read a post on here about an army Pfc. Tariqka Sheffey. Sheffey posted a picture of herself and a statement on instagram that upset a lot of people. These folks are rightfully upset. I’m pretty ticked off myself! What did she do you ask? This fool took a picture of herself, and she stated that she was hiding in her car during colors to avoid saluting the flag. She said she didn’t want to hear anyone saying it was disrespectful, and that she didn’t “give a f*ck” [“IDGAF”]!

It baffles me to no end how someone can have the audacity to put on our country’s military uniform, while they hate it. How can they can be sworn in, take an oath, yet show such a lack of respect for the most basic values that this country was founded upon? I sort of understand when liberals say, “The flag is just a piece of cloth.” Coming from them, it is to be expected. Though I despise that they do it, I understand that they are just misguided fools. We have no choice but to tolerate them the same way that we tolerate a tooth ache on a Saturday evening when the dentist office is closed.

That being said though, when a soldier does something like this, it really ticks me off. I mean, you are wearing the uniform that represents the people that fight for our country. Many before you have worn that uniform, many died while wearing that uniform in service of this great nation. How dare you to put it on, disrespect our flag, disregard our military customs and courtesies, and then have the nerve to post this online? I’m so glad that you got caught doing this. You deserve all the uproar that you have encountered. It seems that you closed your instagram account, I wonder why?

You disgust me, not because you are expressing yourself, but because you are a despicable hypocrite! Take off the uniform, give up your post, and take yourself back to the civilian world with your liberal buddies where you belong. We don’t need, or want people like you pretending to fight for this country. You do more harm than good with that uniform on. I wonder how you will explain to your child that mommy got in trouble for being disrespectful to the country she supposedly defends? Good job setting an example for the next generation in your line.

Some folks have come out to her defense, they say she is a young soldier, and that she shouldn’t be punished too harshly. Others have said that they too did the same thing when in the service. I’m sure that it has happened, but to display it online? To so brazenly state that you don’t “give a f*ck”, doesn’t seem to me like a person who doesn’t know what they are doing. It seems like an intentional act of defiance against our military’s rules. Though I’m not sure if I advocate for her being forced out of the military, or dropped into a war zone with just her bad attitude as some have suggested, I do believe that she should be reprimanded for her behavior. She later attempted to clarify what she did, but it wasn’t an apology. It is a case of too little too late. I’m very curious to find out what happens to her for this.

Allow me to leave you with a story of what a real soldier is like, also courtesy of our friends at Army Times.

On Sept. 17, 1969, soldiers from 1st and 3rd Battalions, IV Mobile Strike Force were conducting a search and clear operation near Chi Lang, Vietnam. Morris, commander of 3rd Company, 3rd Battalion, learned that sister companies from his battalion had encountered an extensive enemy mine field and were engaged with the enemy.

Morris immediately reorganized the force into an effective assault posture and moved them forward before he and two other men went to recover the body of a fallen team commander. Enemy fire wounded the two men with Morris, so he helped them back to the main force and then charged alone into the hail of fire. He threw grenades into the nearest enemy bunker. While his men provided suppressive fire, Morris destroyed four more enemy positions to get to his fallen comrade.

Morris was wounded three times but he did not stop until he brought the fallen soldier back to safety.

Now, that there is what a U.S. soldier is really about. Sgt Morris, and nineteen others were awarded the Medal of Honor for their bravery. The photo gallery of these great soldiers can be viewed via the Army Times link above.