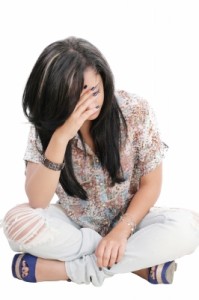 Have you ever heard of the term ‘Shark music’? Last year, I attended a mother’s group for my second daughter to help manage her anxiety issues, and I was introduced to this metaphor. In the famous ‘Jaws’ films, there’s always that same eerie music that plays as the shark swims nearby. It basically foreshadows that something bad is about to occur. At least, that’s what the music is meant to make you think. So what happens when your ‘shark music’ is set off when you’re confronted with an uncomfortable situation? Well, that’s something I pondered as I did my grocery shopping last week.

Every Monday, when both my eldest children are at school, I do the weekly grocery shop. That’s when I have a chance to have some quality time with my youngest daughter, who’s just two years old. On this very Monday, we’d finished up with all the shopping and as I pushed the trolley to the car, Amelia began to have a bit of a meltdown. She started to become fussy; shaking about, arms flaring. I knew what was wrong – she wanted the tasty pikelets that were sitting in the trolley.

Although her screams were getting increasingly louder, I stayed firm and said to her, ”Mummy knows that you want the pikelets, but we’re having lunch soon, Mellie”.

I continued to position the trolley against the car, calming Amelia down at the same time.

As I buckled her into the car seat, out of the corner of my eye I could see a woman peering at me. She was sitting in her white car, which was parked right behind mine. She continued to stare profusely at me. I’d seen that stare many times before, I knew what it meant from strangers. I thought, ”Oh great, she probably thinks I’m a bad mother.”

The woman proceeded to get out of her car and I’d guessed right – she had been watching what was going on.

As I went to grab the first bag out of the trolley, I noticed the woman standing right next to me.

She asked, ”Do you need help?”

Feeling uncomfortable, I then added, “I actually have three children, the other two are at school.”

She responded, “Oh wow! Oh okay then.” She then started to walk away.

I paused for a second. I thought about that concept of ‘shark music’. I then asked myself, “What was it that lead to me responding so defensively?”

Within a short five seconds, I already had my answer. It was my childhood.

When I was younger, I dealt with a lot of emotional abuse. I was insulted to my face, criticised behind my back, abused for not doing things the ‘right’ way. I was called stupid if I asked the ‘wrong’ question, or if I failed to know what to do. If I lost my wallet, it was my fault for not paying attention to where I put it. If I asked for help, I would be ridiculed and made to feel indebted to the person. 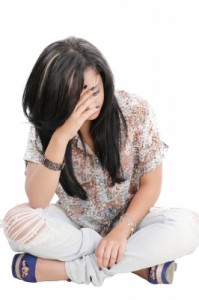 So when that woman walked up to me, warning bells sounded and my ‘shark music’ was activated. I became fearful of appearing weak and vulnerable. I had thought to myself, “She thinks that you’re struggling, that’s why she asked to help you. She thinks you can’t manage.”

But in that five seconds when I stopped to pause, I realised something:

“What if she doesn’t think you’re struggling? What if she just wants to help because she’s a nice person? What’s so wrong with appearing weak anyway? You know that you’re a strong person, so what’s the problem?”

Being able to recognise my ‘shark music’ made me realise that I didn’t want to end this interaction on a bad note. I wanted the lovely woman to know that her kind gesture meant something to me. Because it did.

So, as she proceeded to walk away, I smiled and shouted enthusiastically, “But thank you very much for offering!”

The woman turned around and smiled. She said, “You’re welcome!”

Her response, as well as my own personal growth, had me beaming both on the inside and outside.

It’s okay to ask for help

There’s nothing wrong with admitting that you want a bit of help.

Whether your problems can be solved with a practical solution, or are far too great to be, please know that you’re not weak. You’re not fragile. You’re not stupid or useless because you need someone else’s help. Asking for help does not devalue your worth. It doesn’t mean that you’re incapable.

You don’t need to go through life believing you have to do everything yourself. There are people out there that want to help you.

We are all in this together.

(This post originally appeared on Inside a mother’s mind and is printed in collaboration with the author Thuy Yau.)