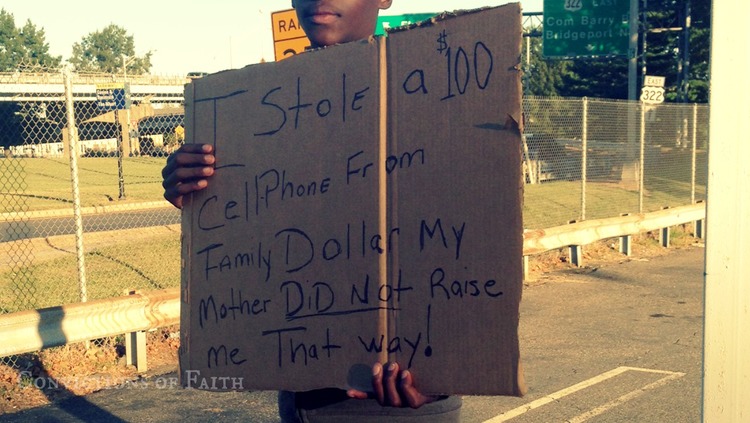 Do you think that a punishment such as this one, benefits the children or makes things worst in the long run?

I pulled in to the parking lot and spoke to the kids mother Kim who explained to me that she was punishing them for stealing from the Family Dollar:

“He came to the store and stole a $100 cell phone and tried to pretend that he found it. But little did he know, I’m an investigator; I found the package and made him bring it back to the store. And she stole candy.”

Kim said she and her kids (12 year old son and 9 year old daughter) have lived in the area for about 4 years and that she felt drastic measures needed to be taken to discipline them this time. Early on in our conversation she pointed out how well dressed her kids both were and that her sons sneakers were worth more than the cell phone he stole. She was making a point that she works to support her children and that they are well taken care of and don’t have any reason to steal.

Sounds to me like mom has the right idea. Why would these kids steal if they get what they want and need? Sounds like an attitude problem, and this is just what the doctor ordered! If these kids end up messed up in life, it isn’t from a lack of parenting, I’ll say that! Read the full story at Convictions of Faith with Alyssa Krumm.