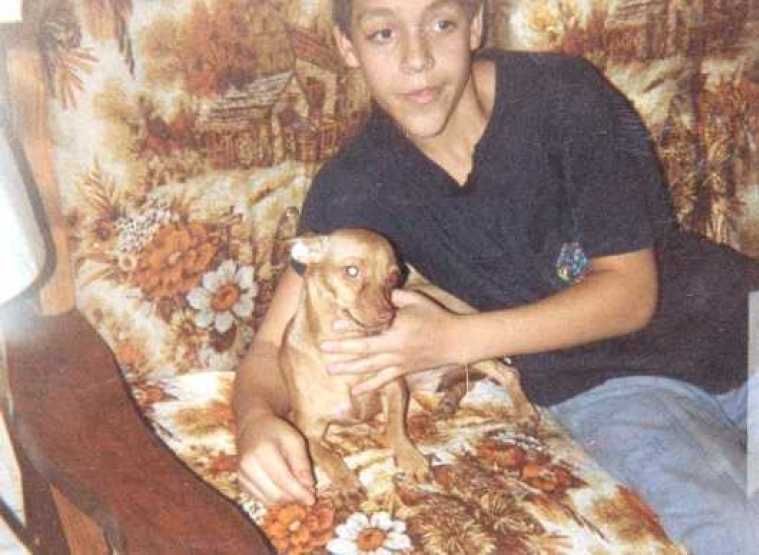 When I was a kid, my neighbor had a dog which had a bunch of puppies. They were offering the pups up to people as they couldn’t keep them. I asked my mom and dad if they were okay with me getting one of the pups, they said they were somewhat okay with it. I don’t think they realized how quickly this would happen, neither did I for that matter.

So I told my neighbor that my parents were seemingly okay with it and the next day this fucker just dropped a dog off at my doorstep. We didn’t know the first thing about training a dog. I think we all just assumed that they knew what to do. Boy, were we ever wrong! Before Peppa, Calbee or Baby, there was my first real doggy. We only had her for a few months and her name was Tuci. My dad and I used to record audio programs, and one of his characters, Don Ramon, had a dog named “Tuco.” Since this was a girl, I named her Tuci. You pronounce it to-key.

In hindsight, I think we did everything wrong with her. Look at this picture above, her tail is tucked between her legs, so clearly she was a fearful doggy. Realizing this now makes me so very sad. I wish I knew then what I know now, I would have been such a great doggy parent. Anyway, my folks made me give her up because none of us had a clue on how to care for or raise a dog. We had her chained to a door when we couldn’t watch her. Now this wasn’t quite crating, but by not giving her the whole house right away, we were sort of on the right track, though not quite. Anyway, she peed, pooped and did all her business there. We didn’t know about weewee pads or anything like that.

When I took her outside, she would cower in fear and not walk at all. But again, we didn’t know what we were doing, we didn’t know about her history, and she’s kind of big to be a puppy. When I think back to her, it makes my heart ache so much because I feel like I failed her. But I was a kid, ill prepared and I was not a good doggy parent, and no one in my house knew any better than me when it came to dogs. We were not ready, I’m so sorry Tuci. In any case, until the day that my father died, he always said that he gave her to somebody. I shit you not when I tell you that I asked him as he took his last breaths among the living, and still he always said “I gave her to this old woman.” I never believed him, but I couldn’t get him to admit to anything else. I mean, he literally took it to the grave.

My father was a proud, stubborn man. I think if he lied, even if he was busted, he’d never fess up. He was a very proud man and would want to save face all the way until the end. But hey, maybe he did give her away, maybe. But my gut says that he didn’t and the thought of what became of this doggy makes my soul ache a deep pain. I know that she is long gone, but still, it is an unresolved matter for me. My mom says he told her the same thing, “I gave her to an old woman.” You know, I am going to die not knowing what ever really became of my dog.

Tuci, I’m so sorry that I failed you. I pray and hope that you had a good life wherever you ended up.

Related Posts
Latino Culture: On being a dad.

Allow me to give you some context on my circumstances. I am on a 2nd marriage, numero dos, my first Read more

Craig Dershowitz has paid over $60,000 in legal fees, his life savings in an attempt to get his dog from Read more

The spoken word has connected me to many individuals, some of these individuals are doing amazing things within the  community. Read more