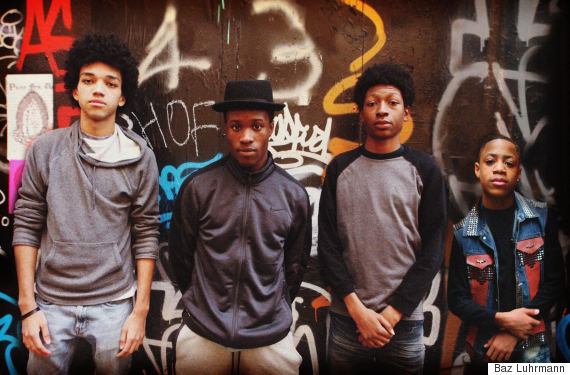 When these people started casting, they created a lot of buzz by “recruiting” real kids from the Bronx. My sister went and tried out for the part of Mylene, and I saw many other LOCAL kids trying out for the same part. Yet, based off of the small research I have done, most of the people that they chose for lead roles have established experience in acting, and are not local kids from the neighborhood.

Never mind the fact that most of us who ACTUALLY COME FROM THE BRONX will wonder what the hell Baz Lurhmann knows about our experience, but this little tease experience, not very cool. I know of many that came out and tried out, MANY! Not one was chosen for a major role. It also seems to me that the Latino element of the community is underrepresented on the show. Maybe I’m wrong on that one, maybe there will be more Latinos added to the show? I mean, they need crack heads right? I’m just kidding, what do Latinos know about hip hop culture? What do Latinos know about music? And finally, what do latinos have to do with the Bronx? Let’s not get too heavily into that though, my friends at Welcometothebronx and Remezcla already did a mighty fine job talking about that topic!

I take exception with the fact that these people brought out all these kids from the Bronx, and not one of them, as far as I can tell is picked up for a starring role. Yet, somehow Jaden Smith who wants to expand his “repertoire” in film making gets a foot in the door. Man, it really pisses me off when favoritism and dad’s name factors into crap like this. It seriously irks the hell out of me! This kid can’t relate to our experience! UGH!

I wouldn’t be as annoyed about all this if they didn’t hype up all these kids only to pick a Jaden Smith at the end of it all. I also recognize other names, but I’ll focus on the kid leads.

I’m not going to watch this show. Generally I’m a fan of Netflix originals, but solely on principle, for wasting my sister’s time, for wasting all those other kid’s time, this show is being blacklisted. I will also tell my sister, all of her friends, and any of the other kids that I know not to watch this one. This show is about us, we are the audience, and you guys jerked us off. That’s not going to fly!

I’ll close with a piece of advice to the director, next time you want to play with the community’s emotions, DON’T!

If it sounds like I’m hating on these kids, you are wrong. This is not about the kids, though I won’t watch the show, I wish them all personal success, and I hope they go on to have great careers. My issue is with the people who played our local kids here from the Bronx, NYC. I’m speaking on behalf of all the Mylene’s I met that day, and all the others who tried out.