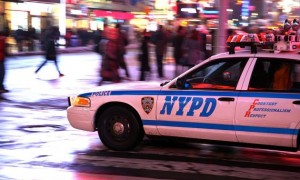 Today I read a story that I found infuriating. Apparently there was a man on a subway train in NYC that was attacked by knife wielding maniac and murderer Maksim Gelman. Fortunately for him, Joseph Lozito had some Mixed Martial Arts training. He also sports a very large physical frame and he was able to disarm and restrain the guy that was trying to kill him until the cops showed up. Now this is the part that I find completely infuriating: according to a lawsuit that a NYC judge threw out of the court, the cops were already on the train and hid inside the motorman’s car because they thought the criminal had a gun.

Lozito sued the city stating that the police officers did not act to help or protect him. Bare in mind, ladies and gentlemen, this is NYC we are talking about. Liberal, Gun Free Zone, NYC! A city where the Government insists that we do not need firearms to defend ourselves. A city where the Government encourages us to dial 911 when we are in danger. A city that asks you to retreat as far as you can before you ever attempt to defend yourself against a life threatening situation. A city where our tax dollars are paying individuals to “serve and protect us” while they hide like spineless cowards.

How sickening is this? The judge threw out the case stating that the police officers had no special duty to protect Lozito. Here is a thought for these ridiculous Liberals in power here, if the police have no obligation to protect us, then what are we paying them for? Why does their literature say “to serve and protect”, and finally and most important of all, why don’t you idiots allow us to carry our own guns to defend ourselves? We don’t need you, you force us to need you.

It’s one thing to say that the police officers made a judgment call for their own safety, but if at the same time the law ties up our hands and makes us victims, then that’s just wrong. Had this man not had some form of martial arts training, there is a good chance that he would have been murdered just like the other victims, while these cowards hid like scared little mice.

I’m not here judging the cops, maybe they have babies? Maybe they are newly weds? No, actually I am judging them. They are cowards. But that’s fine, I’m not one who counts on the police anyway, but don’t make it so difficult for me to defend myself! Don’t penalize us when we do what law enforcement fails to do.

This past Sunday I was waiting for the train, I witnessed a man heading for the token booth clerk’s location. He began to scream and curse at the attendant saying “Where the f*** is the train?” He attacked the booth, cursing, screaming, spitting, and threatening the clerk. He was just an absolutely insane mess. The booth clerk went on the P.A system several times asking for police assistance, silence. He asked again and again, more silence. Eventually the perpetrator got tired of cursing and hitting the hard glass so he left, still no police presence. Mind you, I live right by the Queens criminal courts and no police officers showed up. Meanwhile last week I saw a young kid “hop the train” (not pay the fare) and quite a few cops came out of nowhere to chase him down for his heinous crime. Go Figure.

Today I saw this bullcrap PSA announcement from the “Stop the gun violence coalition” that reenacted the Trayvon Martin and George Zimmerman situation. Great job attempting to create more disagreement between the American people. I hope you idiots gave your expert testimony at the trial since you were there that day.

Do you think they would ever air anything about the Joseph Lozito slashing? What about the other victims that Gelman murdered? No, they don’t care about us defending ourselves against the bad guys, they only care about making us victims. Someone please tell these idiots that the cops are not going to protect them, as per Manhattan Supreme Court Justice Margaret Chan, the police have no special duty to protect us.

That being said, I move that New Yorkers are given the right to protect ourselves. Legalize concealed carry in NYC! What say you?

Please take note of the date on a post. Over the years my views have evolved. I'm constantly learning and growing.
Related Items
← Previous Story Isn’t Elisa Chan entitled to her opinion?
Next Story → Governor Jerry Brown and his transexual kid’s law
Subscribe
0 Comments
Inline Feedbacks
View all comments