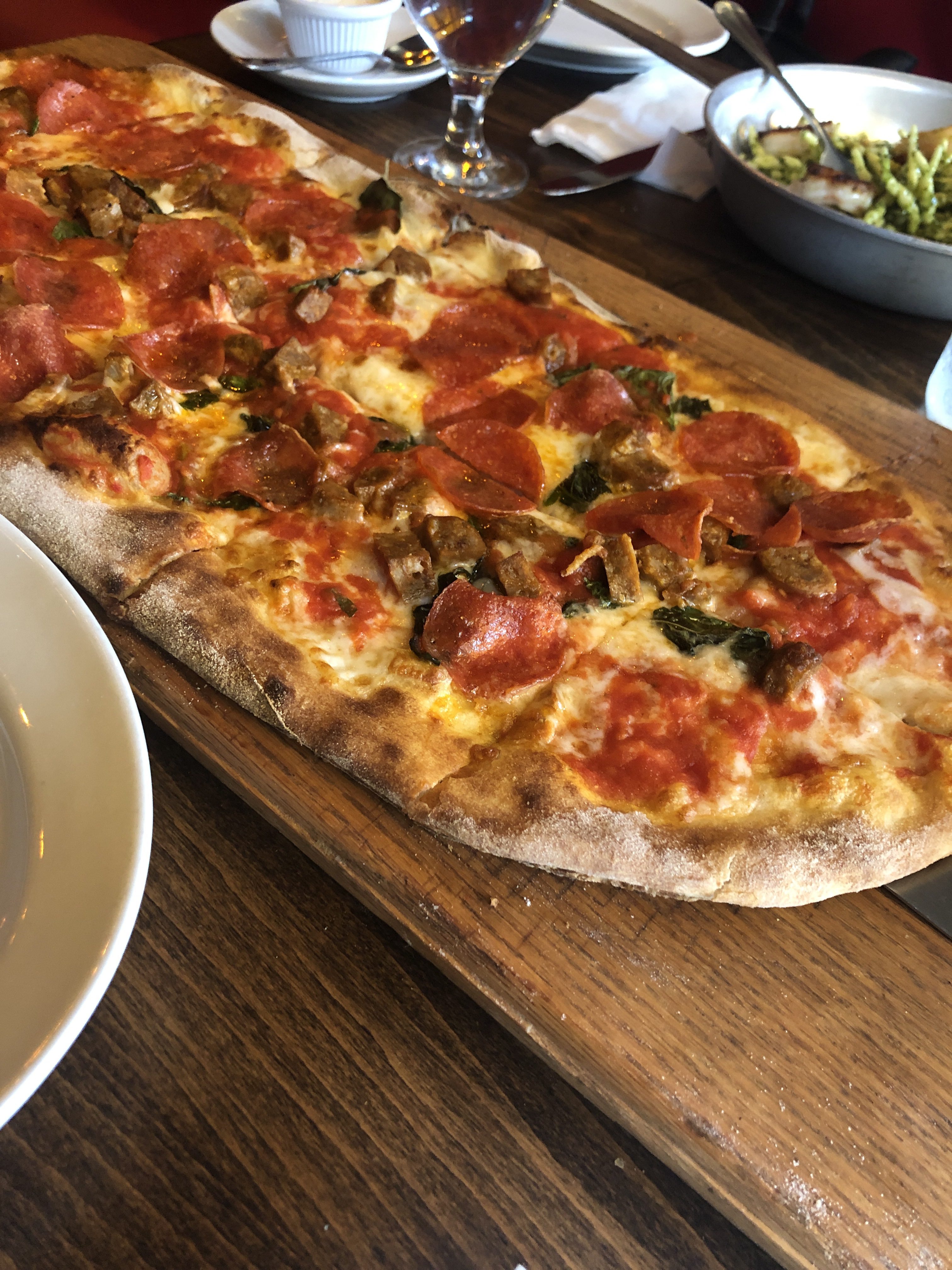 So on a whim I came to try out this spot. One of my coworkers told me about it, so I came with one of my gym friends.

I had ordered a pizza which was somehow messed up, and as a way to correct that oversight, they gave me another pie on the house. Based on the pictures I saw online, I had some pretty high expectations. However, to be honest with ya’ll, I was somewhat let down. Something I noticed and tried to overlook, which my friend also took notice of was the bottom of the pizza was burnt. I tasted it, but was slightly better at ignoring it than she was. For her this was a deal breaker. I liked the taste of the pizza and sauce but felt that it was a bit watery and runny.

Honestly, these days I don’t like to point out the major flaws in restaurants, I try to be a bit nicer. However, if the cost is fairly expensive, then my review bar is raised. This place was not cheap, so I had much, much higher expectations from them. Burnt pizza and watery sauce was not on the menu I had in mind. This was okay. It’s hard to jack up calamari, and they delivered on this. The sauce was good and the calamari was nice and crunchy. I enjoyed this dish. My friend had this shrimp and pesto dish. She didn’t dislike it, and neither did I, but we both agreed that it could have been a bit saucier. It felt kind of dry.

Overall, I was fairly disappointed with this place, for the price tag that they have on their items I’d expect something more than what I got. My friend felt the same about the food and most of the drinks. Though she seemed to like the margarita. The dessert was okay, chocolate cake and ice cream. Can’t go wrong with that, right? Another thing to note, a member of the staff might ask your friend (or partner) if they are in a relationship with you when you step away for the bathroom. I felt that was kind of sneaky and disrespectful to us. Yes, we are just friends, but what if we were more? Why would he wait for me to step away to ask her that if he wasn’t being grimy? That’s not all yo, dude even offered to buy her a drink. My man was running game!

Bro, you don’t even know if we are dating, hanging out, getting to know each other, or just friends. What if she says we are friends, but were on a date feeling each other out? I mean come on now, that’s just wrong. I understand that men are gonna go for theirs, but doing that when you see a woman dining with a man at a restaurant? That’s some ballsy stuff right there.

As a man, I felt disrespected and felt like saying something to him for waiting until my back was turned to try and holler. That just rubbed me the wrong way, but y’all know I’m not one to start trouble over something so petty. Also, I didn’t want to disrespect or embarrass my friend by creating an unnecessary situation. She told me about it and after telling her how I perceived it, we just laughed it off. It’s all good, I just took note of it. It’s not likely that I’d ever return to this place anyway. Aside from the fact that someone tried to hit on her, the service was okay here. Even so, I’m not likely to return with her or anyone. It’s not worth the price in my opinion. Finally, I’m not down with being clowned and disrespected by people like that.