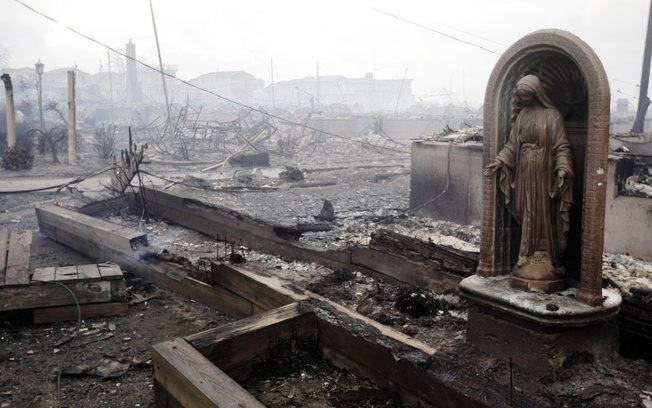 So what happens after the dust settles? Well, for the most part people try and live life as if nothing happened. But something did happen, right? Many people are still without homes, many businesses were looted, many are still in the dark, and it will take a long time for things to “return to normal”.  My team was stuck in Wall street, working before, during and after the storm, because you know, there’s money to be made and Wall street needs to continue functioning. Even if your family is alone and your house is underwater.  Priorities in this country can be insane.

Mostly though during times like these, people generally tend to band together and help out the community. We are seeing plenty of that as New Yorkers are working hard to help out our brothers and sisters in Staten Island and the other affected areas in the East Coast.  But disaster doesn’t come without bringing out the worst in some people. I have heard stories of people getting into scuffles over the gas lines, stores being looted, Con Edison impersonators robbing helpless people and more! In fact I myself was nearly the victim of a robbery attempt, thanks to my perfectly honed street smarts and my speedy ability to produce a sharp shiny silver object I was able to diffuse the situation. Nothing tells a criminal “I’m not the one” like the cold hard steel of a shiny beautiful blade. Not everyone was so lucky though as I saw at least one person being rolled out of a building in a body bag, and there are reports of more than 90 people that lost their lives. Rest in peace my fellow brothers and sisters.

We cannot forget our friends and family that are in the islands. Many people complain that here in NYC we only talk about what happened here and not in Cuba, Jamaica, and other countries. Let’s not get this wrong, we care, we care about everyone. But how can you focus your efforts and energies on another part of the world when so many of YOUR OWN are suffering? I am a firm believer that you take of your own before taking care of others. It’s like they say in an airplane emergency, “make sure your mask is fastened before you try to help someone else with their mask”.

I hear that some marathoners are angry because they came here from other parts of the world and the race ended up being cancelled. Some of them have been quite gracious, giving up hotel rooms for stranded or homeless individuals, and volunteering to help, while others are “annoyed” that the race was cancelled and vow to still run the race. To the former I say thank you, to the latter I say check yourselves you freaking idiots. Did you not know a HURRICANE was coming? God forbid you can’t run your precious race! Damned idiots.

I’m glad to see that many people are recovering power and getting their homes back, but there are many out there that are still suffering. Check with your local authorities and political offices to find out where you can volunteer and help out. God bless the U.S.A!