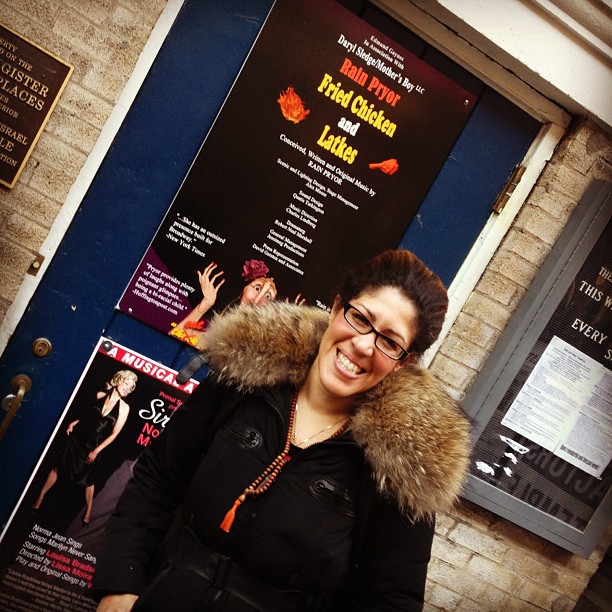 In recent life I have heard the name Rain Pryor here and there.  Mostly after her becoming involved with my buddy Rock Wilk’s production “Broke Wide Open” which she produced along with his 500 names family. I remember thinking “Woh, Richard Pryor’s daughter? That’s pretty damn cool”. So at one point me and Rain connected on Facebook. As a huge supporter of Rock, it was only a matter of time before we crossed paths as she was producing the show.

So after Facebooking each other I started seeing her posts and learning more about her. I realized that this woman was very down to earth and as real as they come. She engages and responds to comments, she posts day to day things just like you and I do. I realized that though she could be, Rain was not one of those celebrity types that thinks they are better than everyone, this woman is real and I’ve grown to love her for it. As a supporter of the arts I have been trying to get to Rain’s show for months now, but I wasn’t able to coordinate the day with the friends and family that I was trying to go with. So I’ve been missing it for sometime. Yesterday Rain did me the honor of coming to see me in a music open mic that I was performing at. I was flattered and honored that this young lady would take time out of her busy schedule to join me in anything, let along to see my performance. My closest life long friends and most family members haven’t even seen me perform, but Rain came. Wow Rain, you rock! I mean, that was that! There was no more waiting for me, after this gesture from her there was no way I was going to miss her show another day! She had to leave the open mic early since she had a show today, so I knew she was performing. I decided “screw everyone else”, I bought my one ticket at 2am in the morning and went to see Fried chicken and Latkes by my damn self today! If I continued waiting for other people I may never have a chance to see the show. So I bought myself a front row ticket and at 2pm today I was at the Actors Temple watching Rain do what she does.

Am I ever glad that I finally made it to the show. The show was absolutely amazing. I came in with certain expectations for a little story telling and some comedy, but nooooo. Oh Nooooo, Rain did so much more, she literally blew my mind. *insert explosion* My eyes were glowing like a mesmerized little boy with a crush as I sat in the audience watching her do her thing. You can feel the powerful energy from all of the audience members too, everyone loved her!  She received standing ovations DURING the show, not just after, DURING THE SHOW! Everyone loved her, today I witnessed some serious love for Rain. After the show I was fortunate that she joined me for a meal and during that time she told me that she was in such awe about that, “I never saw an audience react like that and stand up in the middle of a show like that, I was so touched and overwhelmed Angel”.

Well, I guess it was a day of surprises for everyone. I knew Rain had talent, I mean she’s been in show business for years, but I had no idea that Rain could sing the way she sang! Yesterday I invited her to sing at the open mic and the answer was a resounding NOOOOO..  So I assumed singing wasn’t her thing, but it is. It really is. So moving on…  I had no idea that she could dance the way she danced (she even did that awesome Rerun dance, you know the one)! I had no idea that there would be a 3 piece band there that she would be performing with! And I simply was not prepared for the emotional roller coaster that is Rain Pryor’s performance. After the show, all you heard from the audience members as they exited was “Wow she is so amazingly talented, she is so great, I love her”, and so many more compliments about her talent.

During this packed show Rain took us through the story of her life. She talks about how it was growing up not only the daughter of the late, great famed actor/comedian Richard Pryor, but as a mixed race kid growing up in Beverly Hills during a time when blacks were not so commonplace in that neighborhood. For those of you that may not know, Rain is Half Jewish (Latkes) and half black (Fried chicken). Through various acting bits, songs and several impersonations Rain takes us from her birth, to grade school and racist bullies, and from there she takes us on a journey to high school and even tells us about her friend Wanitta! Rain does an amazing job transitioning between her mom, her dad, friends and herself. There were periods where we were all laughing out loud as she impersonated daddy and his discipline methods, but then without warning she’d jump into something super emotional and have us all in tears. Only to bring back the laughter and fun out of nowhere. You can see why I refer to the show as an emotional roller coaster.

I can’t express to you how impressed I was by Rain’s performance. I think anyone that enjoys a great story, music, dancing, or comedy should absolutely go see this show. Again, Rain literally blew my mind, this was so much more than I expected! Go see the show! Let’s have Rain tell you in her own words what the show is about in this promo video.