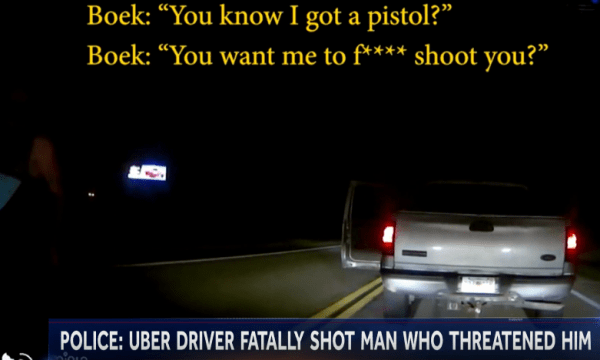 I just came across this situation in Florida where a man named Jason Boek was shot and killed in Florida by an Uber driver by the name of Robert Westlake.

Subsequent phone examinations showed that the boyfriend said he intended to “kick the uber driver’s ass.” This man was in full rage mode, and note that he also had an extensive criminal record.

Boek’s family is claiming that Westlake had an opportunity to get away, but that he chose not to. I have a question for them, it is a dark road, no one around, and he threatens to shoot him. Do you think he was going to be able to back up and drive off faster than a bullet? Boek already cut him off and was clearly a threat. It’s all there on the dash cam video, whether drunk or not, Boek brought this on himself. Period.

Both men in this situation were white, so this will not involve the element of race. I  am curious as to how the both the racists and the anti-gun people will handle this since it was a white guy who happens to be a trained officer shooting a white guy who was clearly intent on inflicting bodily harm.

In my opinion, this was a good shoot. The officer had no chance to get away if Boek started firing. By his vehicular actions he already demonstrated that he was not reasonable, and based on his erratic behavior, any reasonable person would believe his threat. Would you let him shoot you dead in the middle of nowhere like that? He did what he had to do to protect himself and his passenger. Is it possible that he could just have held him at bay by simply pointing the firearm, it is possible, but it is also possible he could have gotten killed. He took decisive action to neutralize an active threat. Understand that under these circumstances, he was under no obligation to risk his own life to protect the perp. There was a clear, verbal threat of shooting, so he got what he got.