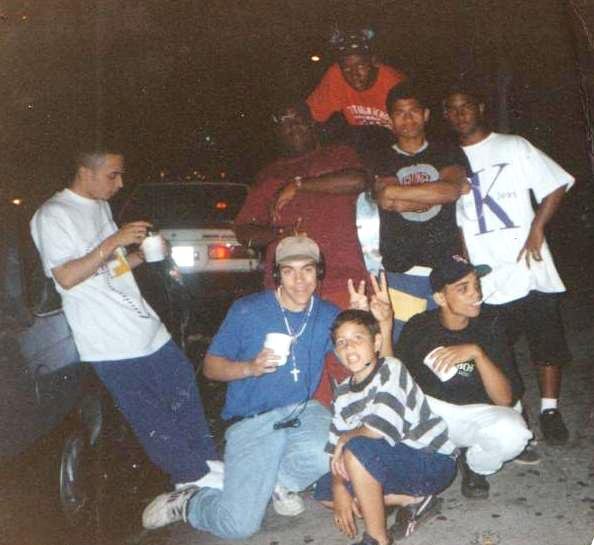 “Come here you little punk. What the hell are you doing around here?”

Good afternoon Officer, I live up the block, I’m just waiting for a few of my friends. This is our meeting island. Heheh.

“Do you have any tools? Anything you can poke or stab me with?”

At this point, he had already invaded my personal space and was patting me down in the torso area with absolutely no cause at all.

Not at all officer. I’m not one of those type of guys sir. I’m cool and just waiting for my friends.

“You’re cool? No, I’ll tell you if you are cool! Come here and get up against the car, let’s see about those tools. If I find anything at all you are going inside.”

As mentioned before, he was now doing a full frisk of my person. Again with zero reason to do so. I was polite, respectful, and up to that point entirely naive as to how much of a jerk this guy actually was.

As he frisked me: Officer, who would be stupid enough to come to a police precinct to steal cars or car parts? I’m not one of those kids, this is just where we meet and you guys happened to move in. That’s all.

“Shut your mouth punk! You need to get the hell away from our cars or I’ll take you inside and you won’t like that. This is not your spot anymore, do you understand what I’m saying to you, punk?”

This guy seemed to be awfully fond of the word punk. At this point I still didn’t perceive any danger. It didn’t occur to me how easily this dirtbag could have set me up. I wasn’t doing anything wrong, so I was absolutely unconcerned about getting into any trouble.

“Kid, you are really trying my patience with your smart mouth, be happy that I’m letting you go and just get the fuck out of here right now before I change my mind. Don’t let me catch you or any of your friends around here again, I’ll remember you.”

So yeah, I say all this to say that I didn’t perceive the danger I was in and what that cop was implying about me at the time. I was a naive kid at times and back then I was still young and innocent. However, at that point I started getting kind of mad and realized that no matter what I said, this jerkoff was entirely convinced that I was there to steal. I felt offended and insulted by him.

Still, I just figured that I had to respect and obey the lawman, so I kept humble and docile and I just walked away from their personal cars which they now parked in my neighborhood meeting spot. That precinct came around long after we’d been playing there and I thought it would actually make us safer, not open up a brand new avenue of danger from those within.

Early on during that interaction I never feared that he’d shoot me or harm me, it wasn’t even a thought in my head. I wasn’t doing anything wrong and I was honest and polite. This man was supposed to protect me, right?

Towards the end of the interaction, I felt frustrated, insulted and humiliated about how this guy treated me with no justification at all. This dude didn’t believe me and that irritated me. But he was pretty high strung and aggressive, as naive as I was, I knew that I had to get away from him.

In hindsight, as I remember how he pushed me around and slammed me on the car, I think that this bully was looking for a reason to arrest me or kick my ass. He was so accusatory and nasty to me, but I was a naive kid and simply stayed compliant and respectful to him. I didn’t give him the reason he wanted, but had I made one false move, I’m sure he would have had me in cuffs and bruised up. Fuck that asshole.

During my entire lifetime, I’ve only had to call the police two or three times that I can remember. They weren’t useful or able to help us any of those times. They showed up, allegedly did their jobs, then left. But the crimes were not resolved and when I tried to call or follow up, no one cared.

I’ve negatively interacted with the police a handful of times. Each one of them, I ended up facing the wall, a car, a gate or being interrogated in a small hidden room in the subway. 4 out of 5 times I wasn’t doing anything wrong. That one time I was on the wrong side of the law, they caught me hopping the train. That’s Fare evasion for those of you who don’t speak hood.

It is my belief that knowing I wasn’t doing anything really wrong most of the times they stopped me is why I was so calm and unworried. I’ve never feared the police, as I mentioned before, this was not something that occurred to me. Fear them? Why? They are here to protect us, why would I fear them when they work for our protection?

That one time I was up to no good and got caught by the cops I just cooperated and got off with a ticket. I have never being arrested in my life. I’m pretty sure that it’s partly because of my reverent behavior, but also due in part because of the way that I look that they didn’t treat me worse.

Yes, I know you might disagree with the concept of white privilege, but my light skin Puerto Rican ass saw the difference in how I was treated compared to my other friends, especially the dark skin ones, both Latino and Black. Yes, I got roughed up a few times, but my darker friends nearly always had it worse when it came to police interactions.

Granted, some were shooting off at the mouth, but wouldn’t you if they were constantly messing with you the way they did with me at the beginning of this story? Maybe even worse? It wouldn’t take too long to develop animosity and distrust towards the police if they treated you like a damn criminal every time you encountered them. I only had a small taste of the abuse that one day and a few other times. Even so, when I think of it now, it really pisses me off. Now imagine a lifetime of that abuse, or worse?

Think about that the next time you judge someone who is out there marching with Black Lives Matter due to police brutality. Not all cops are bad, but if the ones you encounter always seem to treat you like crap, what do you think your opinion of them would be?