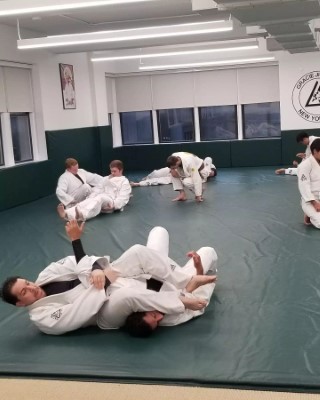 I started training BJJ around 2006. I’ve been training on and off since then. I’ve had up to 13 years off in a row. So actual years training is much less than it would appear. That being said, I’ve been in the game for some time.

One basic technique that I was never really taught well, or simply forgot, was how to hold a full mount. I think I have a very strong side control, but as one of my coaches explained yesterday, you are only using two limbs for control on the side mount. The full mount allows for using 4 limbs and is one of the most powerful positions in BJJ.

That seems to be changing since I started training in the Combatives program in Gracie Jujitsu. We spend a good deal of time going over positional control, including from the mount. For us and our self defense style of BJJ, this is very important, control is everything. That’s why we spend an extensive amount of time working from our back and the various stages of the guard and punch defense.

Yesterday, I didn’t develop a master level of mount control, but I got a better understanding of the mechanics, and I really tried to rely on proper technique instead of sheer strength and power. Though I think that it always is a combination of the two, without technique, there is no way I could hold a full mount, (as explained before) but I’m sure that power factored into keeping it as well.

My training partner and I were both a bit older, but strong heavyweights. We were very playful about it, but also serious and trying to catch each other. When we were doing the reflex development drills, I was able to escape his mount, then not to be outdone, he was able to escape mine. We were laughing our butts off but also learning from each other’s mistakes.

Today I’m fairly banged up and sporting some new bruises, but yesterday was one of the best Combatives classes that I’ve had. Positional control is very important, and I’m super excited to keep building up on that skill. It will take me from a guy who never holds mount, to someone who can. Furthermore, because we spend so much time on our backs, if I get rolled over, I’m not as worried as I can still survive and even attack! Let’s get it!