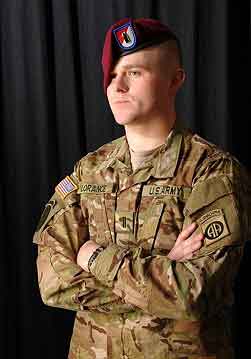 If the fact that the Obama Administration has blocked aging veterans from visiting the World War II memorial and denied death gratuity benefits for fallen warriors doesn’t seem to indicate contempt for our military, how about this most recent story?

Army First Lieutenant Clint Lorance, a 28-year-old combat leader in the 82d Airborne Division from Celeste, Texas was recently found guilty of two counts of murder in Afghanistan and sentenced to 20 years in Ft. Leavenworth.

The story of First Lieutenant Lorance has not been covered by a single major media source.

In July 2012, Lorance was ordered to take command of a platoon in the southern Afghanistan province of Kandahar, a region where I also spent two and a half years training and advising the Afghan National Army. The platoon Lorance now commanded had lost its previous leader to enemy attack.

During a patrol in enemy territory, Lorance ordered a marksman to engage two unarmed Taliban fighters on a motorcycle operating as scout spotters.

In Afghanistan and Iraq, a common enemy tactic is for unarmed fighters on motorcycles with cell phones to track unit movements. In fact, enemy combatants had previously used the tactics against this same platoon.

Lorance, who was operating in a combat zone, saw the scout spotters and assessed them as a threat to his platoon. Aerial surveillance later backed up Lorance’s on-the-ground assessment.

It seems obvious that enemy scouts reporting a unit position and movements in order to facilitate an ambush would define “hostile intent.” But not according to the watered-down Rules of Engagement with which our warriors must contend.

In little more than a year, First Lieutenant Lorance was tried and sentenced to prison. Swift justice to be sure, but why then did it take four years to try and convict Nidal Malik Hasan, who fatally shot 13 and wounded more than 30 during his 2009 rampage at Ft Hood Texas?

The irony of the dilemma currently facing our troops, those who have volunteered to protect and defend our freedoms, is appalling. Shall they fight and kill the enemy but then risk imprisonment because of insidious rules by lawyers?

Or shall they be killed and denied their rightful benefits for their families, because of insidious declarations by lawyers and politicians?