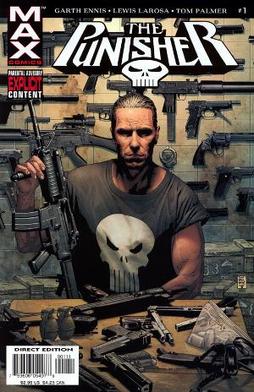 So as you folks know, I’m fairly new to the comic book world, but I’ve been going in hard. I recently picked up and devoured Punisher Max Vol 1. I enjoyed this series a lot, so much so that I’m going to read all the other volumes.

I’ve always enjoyed The Punisher and even when Dolph Lundgren butchered the character back in the 80s, I still watched the movie. That being said, the current series on Netflix is freaking amazing! At first I had my doubts about Jon Bernthal in this role, I knew him as Shane, not the Punisher. But wow did he prove me wrong on that one! Big respect on his amazing work in this role, absolutely phenomenal.

This volume a few periods from Frank Castle’s life. From some of his time in Vietnam to dealing with other baddies in the mob. If you are fan of the Punisher, pick this up, it’s dope.

You know that Frank is big on doing the right thing, even if that means breaking the rules. For instance, if you are an officer who is not doing his job in the field, well, you might just accidentally lose your damn life. If you leave your wife for another woman, and talk to Frank about it (who’s wife was murdered) he might tell you to run. If he does, you better run, or you will probably get your ass whooped! And lord help you if you hurt innocents, even in combat, Frank doesn’t tolerate that! He’s a brutal killer with a code.

I loved this series. Volume One is available on Comixology via the “unlimited” plan. Get it there or at your favorite comic book store!