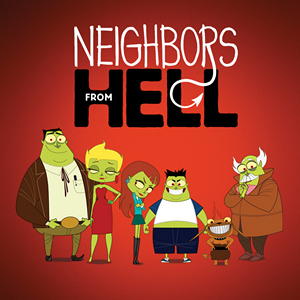 For the last four years, my family has endured the incessant torment of living underneath a child that is a psychopath, and enabling parents. Not a single day passed that we didn’t bang on the ceiling, or screamed at them not to stomp! Then, to compound an already sticky situation, they continued to reproduce at an alarming rate. All in total, we are talking 3 insane kids (a fourth on the way), and a mother who walks like a damn elephant. The father was better than the others, except when he was angry and screaming at the kids at say, 6am!

This apartment has never felt like home because of these people. I tried to talk my wife into selling it, but she didn’t agree, not to mention that her parents also happen to live in the same building which is extremely convenient for her. So we have stuck it out, banging the ceiling, screaming, talking to them, reporting them to the board, and even calling the cops on several occasions. These actions provided temporary relief, but it never lasted long. The last few years in this apartment have been extremely stressful.

Today, the animals moved out. The parents finally realized that their kids are not suited to live in a building. They are far too loud and unruly to live in such close proximity to other people. They need to roam free in the wild. I’m glad that they are gone. Now that little neurotic daughter of theirs can stomp on the floor until her itsy bitsy little feet bleed, and I won’t give a damn! Can you believe that her father told me “we’ve decided that the way to deal with her rage and tantrums is to let her stomp until she gets tired.” Obviously, I took issue with that theory of his, and made it clear that we would not tolerate it.

This morning, and midway through the afternoon, there was noise, but I put some music on and drowned them out. Then at one point, everything went silent, they were gone. My in laws messaged me that they saw them moving out, and when I went downstairs to get the mail, some of the doormen came over and hugged me, they asked if I was happy now?

It’s so funny, but not funny how everyone in this building recognizes them for how loud and annoying they are. I feel a great relief in knowing that they are gone, but at the same time I feel a slight emptiness in my soul. Stockholm syndrome? No, I don’t think so, I think that perhaps it is my desire for vengeance that has not been fulfilled. Their leaving addresses the issue going forward, but it provides me no satisfaction for the years of stress, and possibly the gray hairs and years they have subtracted from my life.

I’d also like to point out the complete inability of The Lovett Group to address the matter. “We sent them a letter” they would say. Another reply we received was “They can make noise” or “They are compliant.” Ridiculous, and utterly useless company. I’ll be providing a dedicated review, and or podcast on their incompetence. Note that the coop board at this building also proved useless in addressing these matters.

My wife and I have agreed that if the next tenants are bad, we are selling this apartment and moving elsewhere. I cannot, and will not tolerate another family like those people. My blood pressure and heart cannot handle it!

Have you had to deal with crazy neighbors? Let us know in the comments, or hit us on social media!