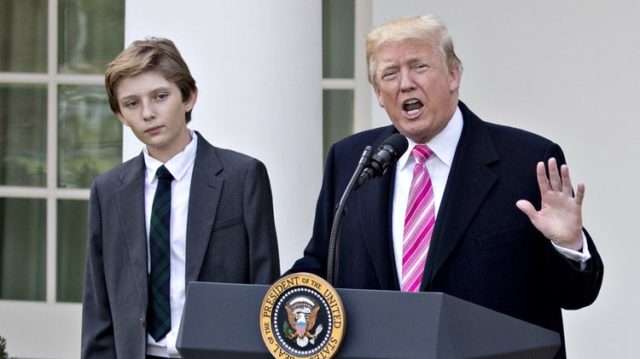 I think that the general perception is that rich kids are spoiled jerks. Most of society thinks that they are entitled and think they are better than the rest of humanity. This thought came to me last night when I saw a picture of Donald Trump’s youngest son, Barron. I wondered if this kid was a good kid or not.

Then I got to thinking about the few rich “kids” I’ve met outside of work on the trading floor. I say outside of work because I cannot truly judge a person’s manner based on how they behaved at work. On the trading floor, it could go either way. Some of these rich traders and sales people were major league asshole scumbags, and others were extremely nice people. However, that could have been a front to survive in that horrid Wall Street environment, so I extend the benefit of the doubt.

Outside of work I’ve met a handful of people who were very well off, and the ones I’ve met have been very nice people. They never spoke about their family background, their wealth, and were extremely humble. In fact, one in particular was so wealthy that his backyard was a lake with a boat parked in it. His dad was the CEO of a major telephone company in another country.

One day I was invited to spend some time at their house, and only then did I learn how well off this guy was. You’d never tell by his demeanor, his spending habits, etc, that he came from such a wealthy family. Until the day that I went to visit him with my then girlfriend, I had zero idea! Me and this guy used to hang out often, and though we did, I had zero idea.

That just goes to my point that some of these folks are not jerks. Of course there are some that will be, but in my personal experience, the ones I’ve met in social circles are okay people.

Still, with a dad like Trump, I can’t help but wonder how that has influenced Barron’s way of being?