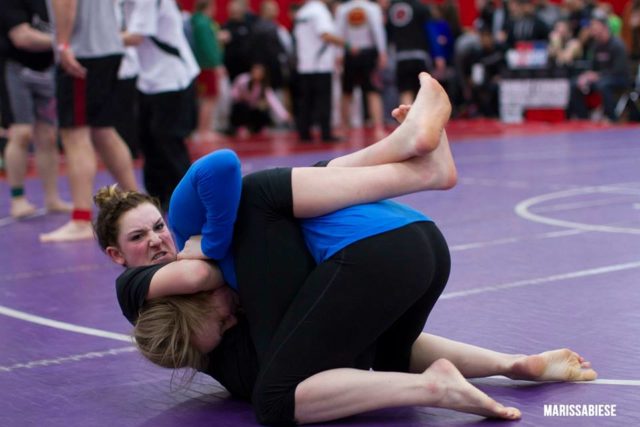 We live in a society where everyone should be treated as an equal. You are expected to treat men, women, black, white, gay, straight, everyone, and I mean everyone the same. That’s how it should be and what we all should be striving for in our civilized society. We know it’s not always the case, I mean, just look at the news today. However, that’s the goal and standard we should be aiming for.

So how does that translate into a sport like Brazilian Jiujitsu? Let’s discuss this from the perspective of a relatively new white belt. A white belt with some damn common sense about decent human behavior!

In my brief experience, I think that whether or not we want to admit it, men have a physical strength and power advantage in a sport like Jiujitsu. That’s not to say that you’ll never meet a powerful woman that will tool you, or that you won’t run into a higher ranking woman who can wipe the mats with your face. I’m speaking in general, when you have people who are relatively close in rank, or even weight. The male will “generally speaking” have a power advantage.

I hope I’m not offending any ladies by saying this, I’m just stating a fact. This is one of the major reasons I’m against fighters like Fallon Fox who is a transgender female competing against females who were born that way. Our physiology is just different and gives us an advantage. By the way, if you’ve ever watched Fallon train, she trains really hard, and I am not taking anything away from her efforts. I’m just stating that physiologically, there is an advantage because she was born in a male body.

All that being said, it is my belief that when you spar with a female, you should dial it down a bit. I don’t know about you gentlemen, but when I roll with a lady I do not use the same level of power, intensity, or even methods that I’d use with a man.

Frankly, if I’m rolling with a man I have no problem whatsoever sticking my forearm into his neck and applying the full pressure of my 200 pounds of body weight. I’m not looking to hurt anyone, (or to get hurt) but I’m not too worried if either of us elbows the other in the face by accident. We’ll survive and deal with it.

However, when rolling with a female, I’m really careful about my elbows, the level of pressure and power that I use, and obviously where I place my hands. Especially if I’m rolling with a much smaller female, I dial down how much power and aggression I use. If I outweigh you by over 100 pounds, it stands to reason that I won’t be in “kill mode” when we roll or spar. The few times I’ve rolled with younger guys who weigh that light, I apply the same concept. I don’t waste their time, but I don’t go anywhere near my full capacity. Dial. It. Down!

Again, I need to be clear and have you understand that I am not implying or saying that women are not capable in jiujitsu. Anyone who has ever set foot on the mats knows that gender has no correlation on how good or bad you are in this sport. However, there are physical nuances that you need to be aware of.

As men, it is your responsibility to be careful and not hurt the ladies. Especially when they are just starting out, you need to ensure that they stick around and don’t get scared away by some overzealous asshole who roughs them up. (I’d say the same applies to any new member though, go easy and teach them.) Use common sense in how you roll, roll safe, and just try to roll smooth. Save the rough housing for the next guy who’s probably gonna shove their elbow into your throat!

If you have any ideas, thoughts, or concerns on this topic, if you think I’m an idiot and I’m dead wrong, please elaborate for me in the comments section. I’d love to hear thoughts on this. Remember, I’m a noob and I’m writing from my own LIMITED perspective and experiences.