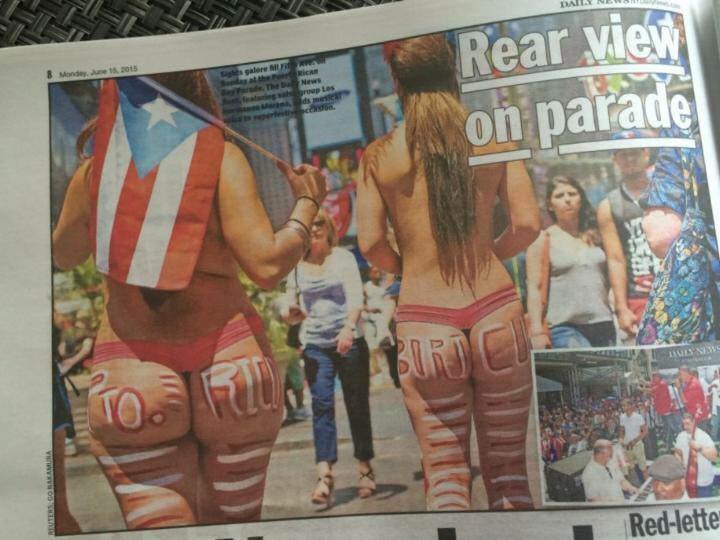 I am aware of how hard many of my friends and colleagues have worked at rebranding the Puerto Rican day parade. These folks have worked tirelessly day and night to take the parade back to its roots.

I personally know the folks who managed the social media for them, and the people responsible for organizing it. The objective was to highlight our culture, the arts, and the true nature of Puerto Ricans.

My issue with this is that they partnered with us for this parade, they know well the direction that this committee is heading. They know the focus on education and family cultural preservation that we have been focusing on for two years now… They are well aware of the contributions and legacy the royal court of the parade brings to the table… And they chose this to be the picture that represents all of that. To add insult to injury the picture was not even taken at the parade… I was on my float and traveled the whole 5th Ave route and did not see anyone dressed like that… It is not that parade anymore. George “Urban Jibaro” Torres.

The New York Daily News, instead of airing Rita Moreno (who I have a total crush on by the way) or any of the many hundreds of flattering images that they could have shared, they run this image of people who weren’t even at the parade!

Why not use an image like this one of my friend Samy Nemir Olivares? Why would they use an image that wasn’t even taken at the Puerto Rican parade? What the hell is wrong with these people?

I’ll tell you what’s wrong with them, that is how they see us, and that is how they want to portray Puerto Ricans. But we are not going to stand for it, are we? This isn’t the Ponce Massacre where they can rearrange the bodies and claim Puerto Ricans were shooting at them! This is clear bull crap and in this day and age we have the means to fight them! So let’s fight them!

Please share this and help us spank the Daily News for this disrespect! Parade organizers said they will protest in front of the News’ downtown offices on June 17th, at 4 p.m. Wednesday.