Should the Blue Bell Ice Cream licker go to prison? 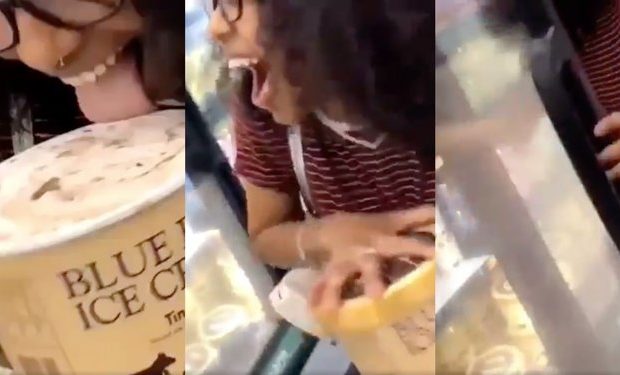 I’m sure by now you may have already seen or heard of the viral video about the woman who licked a blue bell ice cream and then put it back in the fridge at Walmart. This was a young woman acting on a dare and doing something pretty stupid. Legally they are calling it food tampering which is a felony 2 which can carry anywhere from 2 to 20 years in prison.

Personally, I think she was stupid and nasty. And yes she should be punished for this and there have to be consequences. However, I think that even considering a 20 year prison sentence for something like this is pretty fucking ridiculous. You are gonna ruin this young woman’s life and make her into a felon over this silly prank? Come on now!

Blue bell was really angry about it. They swore that they would look to find and punish her. However, I think that they are misdirecting their energies. They are angry because this could hurt the reputation of their product and hurt sales. I get that, but lets be real here, if you look at all the other ice cream brands, they have plastic covers on top making it very obvious if someone tampers with the product.

Blue Bell is angry, rightfully so. But they should also adjust and look within. They are projecting their anger because they are embarrassed about their profits being compromised. Take this as a lesson and improve your packaging. Stupid people and pranksters exist, don’t make it easy for them. But a young person licking ice cream is not a crime that should carry 20 years in prison.

We live in a world where child rapists go to prison for months and murderers could serve a handful of years before walking free. In some cases, they don’t even do any jail time at all. So how can we put a greater value on an ice cream company’s reputation or maybe someone ingesting some gross ice cream than we put on someone’s body or life? I’m not defending her or saying that what she did was right. I just don’t think we should ruin her whole life over a stupid, immature, childish prank. The punishment should fit the crime.

I propose that we give her a hefty fine, some community service and public speaking obligations over her lessons learned and why it was wrong. She could also be made to work as a Walmart greeter helping people as a way of making this right. She should serve no real jail time over a nonsense prank. Let’s not get crazy here.

FacebookTwitter
Related ItemsLet's Talk
← Previous Story Should you compliment a pregnant woman?
Next Story → Old friend with an attitude problem