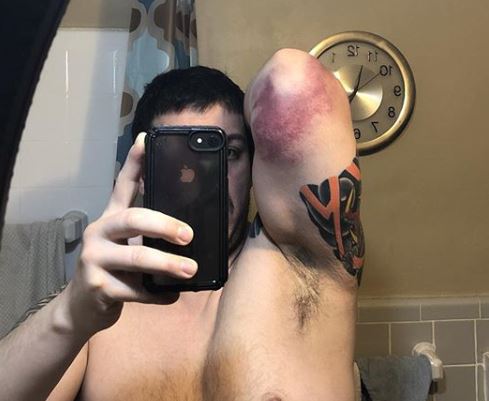 One of the ongoing topics of discussion in our of our older guy BJJ forums is whether or not brand new white belts should be allowed or put to roll on day one.

Personally, I have mixed feelings about this, especially since my new school doesn’t allow us to roll until many, many months later. This is safer, but I suspect it slows your BJJ growth, at least in the beginning. I still haven’t reconciled what should be more important, getting the basics down packed or live experience with an actual resisting opponent.

If you put two new guys who don’t know what the hell they are doing or both turn out to be spaz players, you have a recipe for trouble. That being said, the experience of rolling day one is an invaluable tool to learning what BJJ is all about. You can’t do much, but you can learn what it’s like to feel helpless in the grasp of a more experienced fighter. This is how most of started. However, this is useless if you get hurt early on.

Take note though, rolling isn’t the only way a new white belt can injure someone. On day one of returning, having only just signed the paper work for my new school, I got straight up DDT’d by a brand new white belt! This freaking guy actually did a DDT on me.

This happened to me on my first day back after 15 years off the mat. Welcome back, am I right? We weren’t even rolling, he was just supposed to learn how to fall back or sprawl during an attempted single leg takedown. Instead this freaking guy reached down, wrapped his hand around my neck and threw himself back into a DDT.

It happened so fast and I wasn’t resisting because I didn’t expect him to make any sudden, dangerous moves. I was simply allowing him to work and find the position. Had I known he was going to do this to me, I’d probably have thrown him 10 feet in the air. You know, if I didn’t have some training from before and the necessary instincts to properly react once I realized what was happening, he would have spiked my head into the floor with all his weight, my weight, my forward momentum and the power of gravity. I could have been severely injured because of this damn guy.

After I hit the floor, I knew for sure I was hurt. I felt the strain on my arm from catching all that weight at once. My tricep immediately cramped up and I walked away to sit down. I was pretty pissed off because I only just started and this spaz just set me back a few weeks at least. I couldn’t move my arm. I remember our coach asking “Are you ready to come back in Angel?” I nodded and pointed to my arm. As I sat there, sidelined and writhing in pain, I saw the spaz carry on like nothing happened while training with a purple belt.

Before we attack him, he did apologize and said that he did the only thing he could think of to defend himself. I understood that he panicked and reacted. I know it wasn’t intentional, rather I hope it wasn’t intentional, but at the end of the day, it was a spaz move and he hurt me. We weren’t even rolling, it was supposed to be a DRILL! WTF man?

I have no idea what this guy was thinking and I’d be lying if I said it didn’t anger me. I was pretty pissed off about it, but I kept it cool. Luckily, I had enough experience to know to protect my head. I used my arm to try and roll out of it but the force was too great. I saved my neck and head, but sacrificed my arm. My tricep was almost torn and it turned purple for weeks. I went to a specialist and after some tests they said nothing was broken or torn, but there was going to be a necessary period of recovery. Thanks to a spaz I was out for weeks! Right… on… day… one! BRUH!

I don’t know that it would have made a difference if I was a blue, purple, brown or black belt. I think that this ddt stunt would have caught anyone off guard and hurt them. So it’s not necessarily making the case for or against rolling, but it’s worth noting because it highlights how dangerous a new white belt spaz can be, even without rolling!