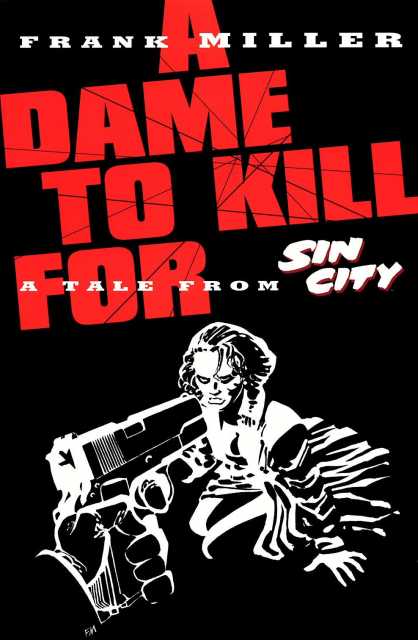 I just finish reading the second comic in the Sin City collection and it was pretty damn good.

This one is called A dame to kill for. I kind of like the way that the first comic was tied into this one at some parts. That was pretty damn cool. The story here is pretty damn trippy. It’s about a guy who is trying to get his stuff together and this woman claims that she needs his help and pulls him into the darkness.

I kind of feel bad for the guy because he is trying to get it together but he is blinded by love. Unfortunately for him, he is just another cog in the great machine that is Ava’s manipulation scheme. This woman is evil, after the way she did him in the first couple of scenes of the comic I really wanted her to get what you deserve. I mean she is straight evil with it.

I understand that some women are beautiful and us men being the weak beings that we are can be easily manipulated, but the way she did it was not even on the human level. I’d be lying to you guys if I wasn’t annoyed and looking forward for her to get what she had coming. She even said herself there is a word for what I am, but people don’t like to use it, evil, just pure evil.

There’s so much that happens in this comic and I don’t want to load this review of sorts with many spoilers, but if you enjoyed the first comic then you are definitely going to enjoy this one.

The really cool thing about the sin city comic series is that they are not so long that they wear you out. When I read the World War Hulk comic series I enjoyed it, but it was so long and exhausting to get through. I love The Walking Dead, but it’s also a very, very long series as are many others that I’ve really enjoyed.

The way that Sin City is set up it’s like there are many stories that tie together at some points, but each one is its own story with a beginning and the end that is about 100 pages or so. This way you can get bits and pieces of the story and enjoy it without feeling that you have to keep reading and reading and reading to get to the actual point of the story.

I saw the movie a long time ago and I will watch it again once I finish this comic series. I’m going to look up how many stories there are as I am curious, but I’ll definitely finish reading them all before I watch the movie again. In fact, I thought that there may have been a Sin City 2, but I’m not sure I could be confused.

The artwork here is also very interesting and sometime it’s a little hard to make out what I’m looking at. That being said, Sin City has done something that the other comics have not. This series has gotten me to actually focus on the pictures more closely, to study them more than just reading the content, which is what I usually do. I think I said it in the last one and I’ll say it again, I am loving the Sin City series. These stories are freaking crazy.

These stories are so crazy, that as I lay in bed reading the last one, my head started spinning and I thought I was having a stroke. I left from here to the E.R. Turns out I developed vertigo and haven’t been the same since. Now that’s crazy.