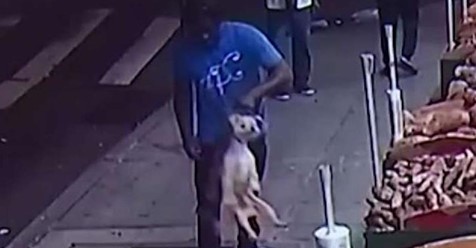 Did you see the story about a terrier who was stolen from a bodega yesterday? The dog was returned to it’s owners. Do these people realize how lucky they are that this thief returned the dog? I mean, I’d still want to find the son of a bitch who took the dog anyway, but at least they fucking returned it.

One of my biggest fears when my wife takes my dog out is that someone could try to take Peppa from her because they think she’s cute or they can breed her. Obviously, I don’t worry as much when I take her out. I’m much stronger and more dangerous than my wife is. But I can be knocked unconscious or shot, I’m not immune to it. But in order to get my dog from me, you’d have to render me unconscious, otherwise I will fight you with everything that I have.

That being said, I hope these people learned their lesson. I hope that you readers who do stupid shit like leaving your dog tied to a tree while you enter a store learned something too. Don’t do that shit! I’ve seen larger dogs, and those are a bit more menacing and less likely to be stolen, but little ones are too easy to take. I’d never, ever, ever  leave Peppa anywhere where she’s not under my protection. I don’t even like leaving her home alone!

I don’t understand how anyone could do that. We obviously live in a world that is filled with psychopaths. I mean look at the way this fucking scumbag took that poor dog. If I saw that, I’d run up on him so fast! And for those of you who doubt me, I’ve already confronted people who were mistreating dogs in my presence. Fuck you. There are things we just can’t allow to happen in our presence, animal abuse is one of them.

I hope they learned! Don’t leave your fucking dogs unattended! And while we are at it, don’t leave them in hot cars either.