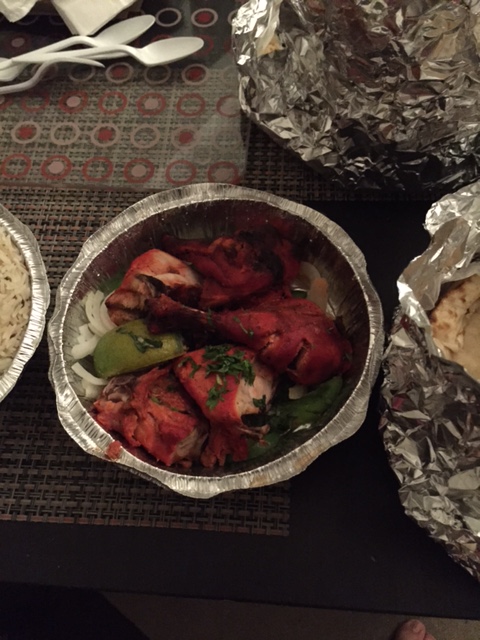 So it is very late, and I am hungry. Before you criticize me for eating so late, allow me to explain. For the past two days, and two nights, I have been bedridden. Laid out with one of the nastiest migraine headaches that I have experienced in a very long time. In essence, for the past two days, all I have done is sleep. I have eaten little things here and there, the most recent being a sandwich which I promptly rejected and was possibly one of the grossest vomiting experiences that I have ever had. So much so, that not only did I have to brush my teeth afterwords, I had to take a full shower to get off the stench.

Gross. I’m sure this is exactly what you’d expect when coming to read a restaurant review, right? Well, I’m just giving you guys perspective.

Sohna is the only place that is opened this late, (I ordered at 2:20am or so) that isn’t pizza. I am trying to eat some “real” food and not pizza today. So following some expert advice from my lovely Indian Superstar friend, Pooja Narang, as well as some food items that I recognized, I ordered the following, bare in mind that this is take out.

Naan is a bread like product. I only remember because my friends told me the name over and over back in the days when we’d go to this Indian spot for lunch. I always ate the same thing, the owners knew me and always gave me the same food items. I can’t remember who it was, but I took a female on a date there once. I wish I could remember who it was? You can’t go wrong with baking a bread like product. So, this was as expected, okay. Heheh. I tried a bit of all three, and with the exception of the garlic, it all tasted the same to me.

What is food without rice? This is a major staple for us Latinos, so you know I had to get some rice. With this, pretty much like the above item, it’s pretty hard to mess it up. The rice was okay, tasted like pretty much any fried rice does. There were little pieces of onion or scallion in there, this gave it a nice crunch of sorts to it. This item was recommended by Pooja, I wasn’t sure how I’d feel about this one, but I figured that I should take her advice and try something different. My wife has ordered this on occasion, so I figured, that if I don’t like it, she’ll definitely eat it. Here are my findings, I’m not a huge fan of “wet” food like this, but the chicken, vegetables, and flavor profiles were pretty good. I can definitely eat this dish, and I’ll try it again. Since I ordered quite a good deal of food, I saved about half of it for the lady. Hopefully she’ll be pleased to find this in the fridge tomorrow, after all, she was unhappy when the delivery guy rang the bell at 4:45am. Tandoori chicken is another one of the few Indian food items that I know. When I was younger I referred to it as “the red chicken.” I don’t have anything against indian food, but it’s never been one of the cuisines that I regularly eat. However, whenever I did, my first question would be, “Do they have the red chicken?” So when I saw this item I immediately checked it off as one of my choices. It was just as I remember it, dry and a bit hard. Any of you that ever ate my chicken, know that I used to joke and call it “rubber chicken.” I like my chicken very well done, so this type of chicken is right up my alley. T’is was good.

There were some other miscellaneous items in there, a few sauces, and some pieces of vegetables. I don’t know how you are supposed to prepare or eat indian food, so I just ate it Puertorican style. Rice and Chicken, with a side of bread product. LOL.

First thing I have to say is that they were very late on the scheduled delivery time. Now, we all know that I stand with the delivery guys, but, it has to be noted that the projected arrival time was well after I ordered the food, they estimated way ahead giving them a major buffer. They went well past that buffer, and I started to question if the food will even arrive?

I ordered the food at approximately 2:22am, the scheduled delivery time at it’s late point was 3:30am, well over an hour later. Well, it was 4:15am when I decided to pick up the phone and follow up on the order. Turns out that the guy didn’t even process my order. Now it is very late at night, and mistakes happen, that’s the only reason I didn’t cancel the order. However, the first lady I spoke to didn’t seem to want to help, and the second guy, though he eventually figured it out, was initially telling me that the order wasn’t received and that I needed to call grubhub. Only to moments later read my order to me that he “just found.” Come on man, you slipped up, own it, don’t blame it on a computer.

The delivery guy didn’t even want to come up with the food. Now, as I mentioned before, I always look out for the delivery guys. They are middle men in this, and though I felt like stiffing him on the tip for not even wanting to bring me the food, I couldn’t do it. It’s past 4am in the morning and he’s out here working. I couldn’t stiff the guy.

Anyway, in a pinch, once you get the food, it is edible. If nothing else is open, and you are starving, the food was okay. Even if you are not a fan of Indian food, you can’t go wrong with some naan, tandoori chicken, and fried rice. It’s almost generic in nature, and would be palatable even to the most reserved diners.