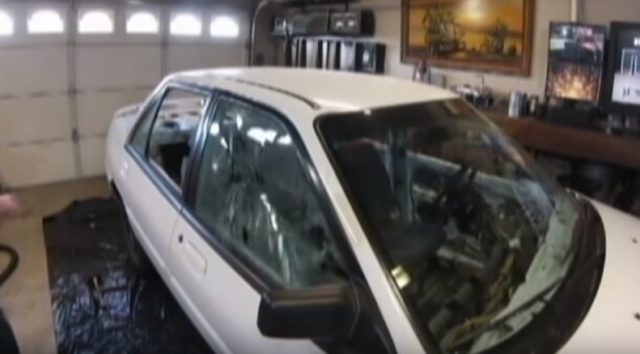 We were a bunch of kids riding our bikes, then this car came and almost hit some of us. He honked his horn, screamed at us and then drove off. We followed.

Back then, it wasn’t rare to find a spark plug on the street. So we found one, slammed it on the floor, then took the porcelain pieces from it. If I recall correctly, there were about four of us and coincidentally the car had four glass windows. Imagine that! We waited a little while to make sure the owner was gone and then we took the liberty of donating four spark plug chunks to this man’s vehicle.

Each of us took a window and we counted it down, 3, 2, 1 then BOOM. Upon impact you heard that super loud bang as all four windows disintegrated to dust. We then got on our bikes and dipped. We heard some people laughing, some screamed out of fear and some were cursing us out for being criminals. But we were gone as fast as the wind, none of us was looking to get shot or arrested. However, vengeance must be exacted upon this asshole. We didn’t live in the area where he nearly hit us, we were out cruising so we weren’t too worried about him finding us. But still, I think he’d know why this was done to him.

Moral of the story? Don’t fuck with ghetto kids and leave your car outside unattended, we’ll fuck your shit up. I’m not proud of these vengeful acts, but I believe he deserved it for being a total jerk to a bunch of young kids who weren’t bothering anyone. Fuck your car windows!