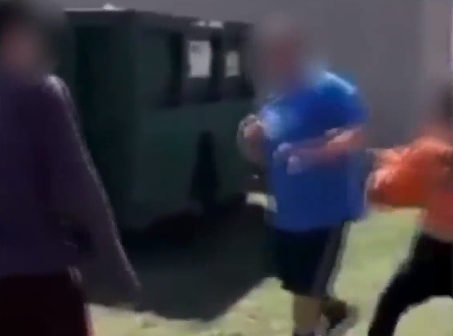 I came across this story on my facebook feed, and it really, really angered me. A 12 year old boy who has special needs was being punched repeatedly in the bathroom by his so called “friends.” Then on another video, the same boy was being punched and kicked by some other kids including a female.

The parents have spoken out about this and they are all about awareness and forgiveness. They are asking us to not cyberbully the kids and to understand that they are children and have their whole lives ahead of them.

I respect their views, but I’m no damn pacifist and I’m not nearly as forgiving. Those kids are freaking assholes. I don’t approve of them getting death threats, but let’s not sugar coat it and act like they don’t know any better. Those malicious little fucks know what they are doing and it’s fucked up.

Rayden is physically a big boy, so thankfully he hasn’t gotten too hurt from the bullying, but that doesn’t make it okay. He was writing on his arm, “I want to die” or something to that effect. So clearly this has affected him.

You know what would be funny as shit to me? If he decided to retaliate and put those damn bullies on their backs with a well timed punch right to the fucking mouth. I wonder if their parents would be as forgiving towards him if he hurt one of those damn kids.

I hate bullies. I’ve hated them my entire life. I encountered it growing up and it is part of the reason I’m a bit jaded about things like this one. Mind you, I’m not one of these people who wants to raise kids in a bubble. I know that kids can be assholes. But going around and punching a kid the way these guys did? No, that calls for some serious ass whooping!

I’m glad these kids were stupid enough to record this, otherwise we may have never known and it could have just gone on and on. I hope those little fucks have learned their lesson. Though somehow, I doubt it.