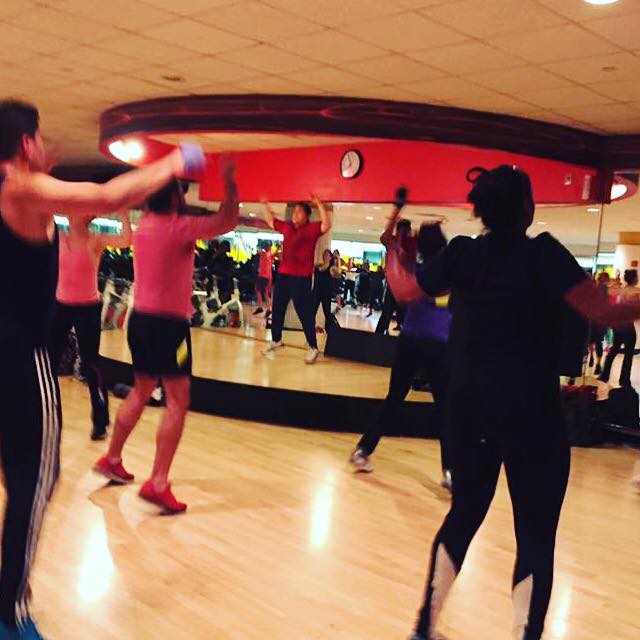 I taught two classes on that day. I treated each one as though it was the first one. When I teach, I leave it all on the gym floor! You won’t hear any whining from me, “Wah, Wah, I taught already, I’m tired and sore.”

Listen, if you can’t do two classes back to back, that’s okay, there’s nothing wrong with that. Just don’t sign up to teach two classes. If you do, well, we expect you to be able to give 100% to each class. The new batch of students walking in doesn’t care that you just taught a class, and it’s not fair to them that you give them a weak class because you are tired. If you can’t hack it, don’t do it.

I had a great time covering for Russell, it was my first HIIT class at my Kew Gardens home gym. As expected, some people left without even giving me a chance. I suppose they feel that they are too good to attend a class being led by a guy who’s been taking classes with them. I heard a few comments along the lines of, “What can he teach me? I’m in better shape than he is, I’ve been here taking these classes way longer than he has.” In better shape than me? I don’t know about all that! As far as what I can teach, well, you’ll never know if you don’t stick around to give a fella a shot, will you? I bet you’d benefit and love my class if you only stuck around, but that’s on you.

A few left, but many more remained, and I am grateful to you all. Most people who take group ex know me from when I first started last year. They saw me waddle into the studio at nearly 300 pounds. They saw me struggle, sweat, and fight through every session. They’ve heard me grunting, hollering, and grinding my way through dozens and dozens of pounds of body fat. Many have bore witness to my transformation from what I was then, into what I am now! It inspires and motivates them!

Due to this I was excited, but also very anxious. I spent a good deal of the day running back and forth to the bathroom. My stomach is one of the ways that nerves manifest themselves in me. Whenever I am very nervous, the food becomes liquid, and I spend mucho time releasing it. I was terrified.

However, once the time came for me to stand on stage, and I heard that familiar thumping of the bass, and I introduced myself, I performed the job to the utmost of my ability!

Interestingly, I was exhausted from the early morning class, and I had a nasty cold! I wasn’t at 100% but they’d never know that. As I mentioned in the beginning, I leave it all on the floor. Though I had a few moments where the illness caused me to blank out for half a second, I continued moving, and kept the class working very hard the whole time. Even during those moments where I felt I was going to pass out due to exhaustion and illness, I kept pushing. Again, you’d never know I was run down if you were in my class. I simply don’t allow that to slow me down.

Most of the feedback I received was positive and very encouraging. Nearly everyone loved my class, and they were all drenched in sweat! Of course, a hater or two were throwing shade. Also, a few folks heard a person talking crap about me and told me about it. “Angel, there is some serious shade being thrown your way. It looks to me like someone is really jealous of how well you did, and how everyone loved you!”

Heheh, I didn’t confront anyone or say anything. Hate is to be expected, it’s the way of the world. Not everyone is as committed to doing as good a job as I am. Though every penny helps, I’m not doing this for the money. I only get a few sub classes to teach, and it doesn’t add up to a lot of money. The reason I do this is because I love it, I am passionate about it, and that comes across when I teach, and when I talk fitness. The people can tell, and that’s the reason nearly everyone enjoyed my class, because I bring it, and I keep it at 100!

Moral? I was scared, but I survived. Confidence is nothing more than a series of “being scared and surviving.” The more you do it, the more you realize that it’s okay, and that you can do it! Face your fears head on, and then crush them my friends! Oh, and pay no mind to the haters, let them hate on!