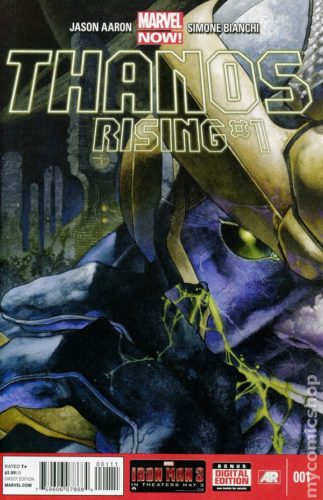 So as you read here, I have signed up for comixology. I’m really digging how they scroll through the panels. They did a really good job with that aspect of the app, it makes focusing and reading the comics so much easier for me. I’m a book reader, and the whole comics format is new to me.

So of course, after all the Infinity War stuff that we’ve been watching over the last 10 years, you know that many of us comic book noobs are going to get into Thanos. I’m actually reading an origin novel of his called “Thanos: Titan Consumed,” its pretty good and I’m enjoying it thus far. So when I started reading this origin comic, I noticed that the two stories though indeed sharing some common threads, they couldn’t be more conflicting in their core stories if they tried.

In one of them, Thanos is loved and accepted by his father and the Titans. In the other one he is feared and hated by everyone including his own father. The thread that they both do share is Sui San, his mother, and how she hated him from the moment she laid eyes on the monster that would bring death to all.

I finished this 5 comic series relatively quickly and I did enjoy it. It takes us back to Thanos’ youth and walks us through how he became who he becomes. I don’t want to drop any more spoilers on here, but if you enjoy Thanos and are relatively new to comics, you may enjoy this story. I’m not sure how in line it is with the prior comics, etc, but it was entertaining. I do believe this was the first Thanos origin story, at least that’s what I understood from Wikipedia. Though like I said, the story is very different from the novel I’m reading. I don’t know, go figure. Its pretty cool and I can’t wait to take in more!