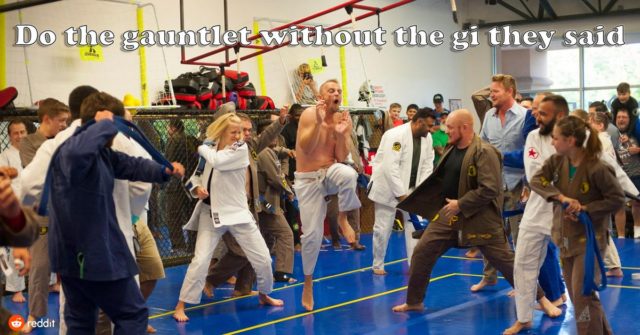 First, I should state what a gauntlet is before proceeding. Basically, when you advanced belts, you either run down a line while getting whipped, or you turtle up and get whipped with the BJJ belts. As I understand it, you get whipped by those at your level and higher.

I know that not every school does it, but most that I’ve attended have the gauntlet. Personally, I’m not a fan of the gauntlet. Why you may ask? Well, in the art of Brazilian Jujitsu there is absolutely nothing that has to do with a belt whipping. Is there?

I mean, if you have to roll with a bunch of people, I get that. It’s an endurance test that has to do with jiujitsu. The gauntlet is guys just whipping you, with no reason, gain, benefit, experience, or art advancement coming from it. It actually serves no purpose.

When the time comes for me to advance, I’ll have to deal with it because it somehow became a part of our culture as BJJ practitioners. However, a reader asked for my opinion on it, so I’m being completely honest with y’all. I simply don’t like it. It doesn’t improve or gauge your jiujitsu game in any way, it’s simply a beating. I’ve seen some people get really nasty welts from it and I just don’t see any benefit whatsoever from doing it.

In case you think I’m just being a wuss, let me put this to you. When I was about 15 years old, I went through a gauntlet. But, they weren’t using gi belts, they were using fists, kicks, and grabbed me to slow me down. I got the crap beat out of me as I got jumped into a street gang in the old days. I took that beating like a champ and except for when the really big guys who’s body shots slowed me down, I kept fighting through it! Know that you ain’t talking to no wuss here, I just don’t like being beat for no reason.