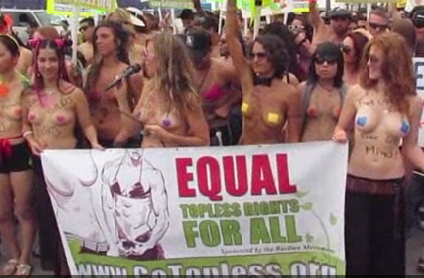 This last Sunday, 24 or so women went to Bryant Park to protest their right to go topless in the city. Though it is not “illegal” for women to bare their breast in NYC, it is clearly not the norm.  This isn’t Europe and apparently we are not as “evolved” as they are. I’m sure you can all imagine how well the practice of exposing female breasts would go over in a city like New York.

The issue that the women were protesting is that they want to de-sexualize breasts. They would like to see the the stigma around a woman’s breasts removed in this country. What do you think about that? Personally, I’ll say “Good luck with that!” I think that we are not ready for that, especially in a big, immature city like New York.

Yesterday after I got my haircut, I was standing outside with my homeboy 360. We were chatting for a bit when this woman walked right by us wearing these tiny, tight shorts that could have been panties or part of a bathing suit. We both looked at this woman, then we looked at each other and just shook our heads. We didn’t say anything to her, we didn’t do anything to her, we just noticed, we admired the view, but that was that. However do you think that everyone in NYC is going to behave as maturely as we did? Hah! Not a chance!

As she walked by us, we could see on her face that she was uncomfortable with all the attention she was getting from the men outside. Let me ask you, if you dress like that, what exactly would you be expecting?  I know when I used to run in the streets without a shirt, or when I used to take my shirt off at the clubs, people noticed and they gave me attention. Sometimes good, sometimes bad. Like it or not, you can’t wear something that revealing and expect that no one will look or notice you. It’s going to happen, guaranteed.

Now we can all agree that no matter what a woman wears or doesn’t wear, that she should be treated with respect. I believe this, and I live by this. Nothing that she wears justifies misbehaving or disrespect from anyone. Ok, we have established that. That being said, we do live in a highly sexualized society, and we are going to notice these things. If a woman comes out bare breasted, or wearing these panty shorts, men and women are going to look. Some are going to disrespect you. Some are going to salivate over you. Some are going to approach you. That is how things are in this society. Also you have to bare in mind that there are some very sick people out there.

I’m not justifying bad behavior, I’m just stating things for what they are. Perhaps these 24 women in Bryant Park, and the woman pictured above in Venice are part of the movement that will change things. But for the time being, I would advise you to keep that pepper spray handy. Just in case.

The right to bare breasts? http://t.co/x7MZSjlyFo