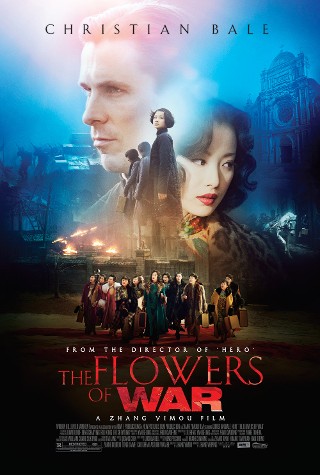 You are probably wondering, “Wait, there is a pretty side to war”?  Well the answer to that is no. War as we know it is when two or more countries, people, or groups are involved in battle against each other. The rules at the most basic level are rather simple. You try to kill or capture them, they try to kill or capture you. But in real life things aren’t that simple.

There is an ugly side to war, a side where innocent children are hit with powerful bombs and stray bullets. A side where a child is left to fend for themselves because both parents were killed. A side where soldiers capture and torture enemy citizens. A side where combatants rape and kill the enemy women and children. It is an ugly, disgusting side, one that we would not like to think happens. But it does my friends.

Yesterday my wife was watching the movie “The flowers of War“, a movie that I have avoided for months. Why have I avoided this movie you ask? Because the premise of the film, the things that happen, they are so terrible that I simply didn’t want to see it. I am a very emotional person and I knew that this would get stuck in my head, I knew I’d be thinking about it for days before it left my mind.  So here we are. I didn’t watch the whole movie, but I saw snippets and parts that accomplished just what I was trying to avoid, getting it stuck in my head.

You know what I wonder, if any of those Chinese people that experienced the Japanese invasion of Nanking could ever forgive the Japanese soldiers for what they did. Today Japan and China are both our allies, sort of. Americans travel back and forth to China, Japan, and so do they among themselves.  But just a few generations ago we were at war with them, and they with each other.

I wonder if 50 years from now the Iraqi people will be our best friends and love us the way we love the Japanese. I wonder if that’s possible after so much fighting and death?  Look at Germany, the same applies there, those guys loved invading the crap out of European countries and today I work for a German firm on U.S soil.

War isn’t pretty under any circumstances, but there is an ugly side to war. I wonder long after the bullets stop flying, and peace treaties are signed, when does the hatred and hurt stop, and when does forgiveness, friendships and acceptance begin? Is it like that bully you ended up fighting that became your best friend?