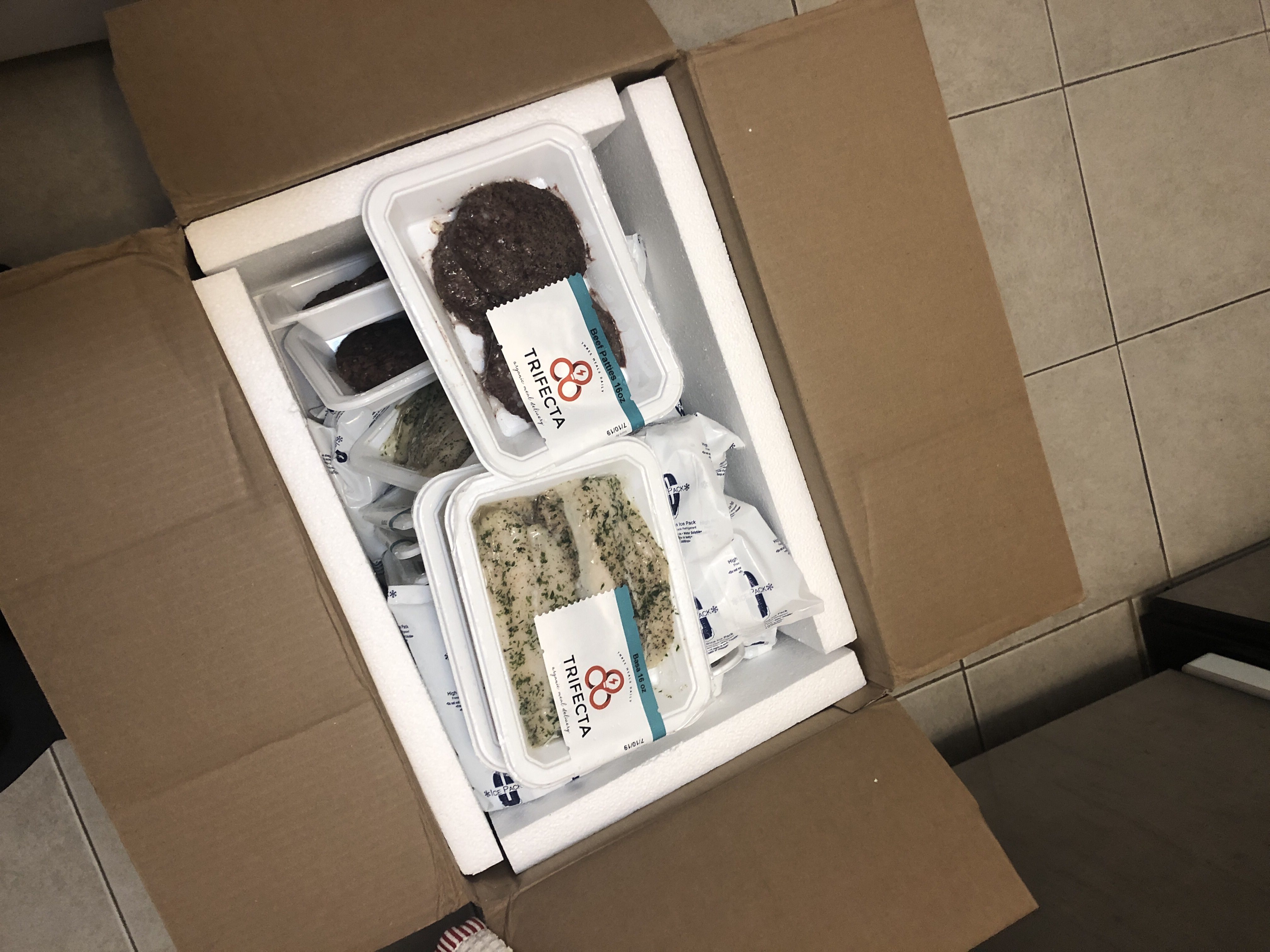 Okay, so I’ve been trying to find the best way to handle my meal prepping and food situation. I’ve tried cooking, eating out, and now I’ve moved on to even trying outside meal prep.

The first company I’ve tried meal prep from was Trifecta nutrition. Here are my thoughts so far.

So first and foremost, we have to understand that these meals are marketed as “eat how you train.” Their objective is to get you healthy and lean, or muscular, etc. It’s health food, so that being said, you know that some sacrifices must be made in terms of flavor profile and so on. Understand that, I do. Here is how I will judge Trifecta and any other meal prep service that I try. I want to eat clean, yes, that’s for sure. But I’m also factoring in the cost per meal as well as taste, ease of use, likelihood of continuing, fullness, etc.

Did Trifecta satisfy me? From a feeling full perspective, yes. I ate the meals and I felt rather full. However, speaking in terms of calories, you have to remember that these meals are relatively low calories. I ate the breakfast meal, and I felt full and satisfied, so much so that I neglected to eat my next meal early enough and ended getting a headache. So take note of that as you will need to stay on top of your overall calorie consumption. Especially if you are like me and get a headache if you don’t enough, especially after training!

How was the flavor? Well, the chicken, steak, and beef patties didn’t taste bad, but they didn’t blow my mind. However, note my early disclaimer, this food is meant for health and stuff, so I’m not sure that it’s supposed to taste amazing. Don’t get me wrong, it wasn’t bad, certainly better than my cooking. But if I’m going to invest about $10 a meal, I expect a bit more in the flavor and satisfaction department.

I think the customer service from these folks is outstanding. I was able to get help online within minutes of starting a chat. I always had my questions answered and the support reps were always extremely friendly and professional. As you can see from the chat below, I got my answers and even some jokes in there. Very pleasant customer service people.

The food comes really well vacuum sealed and appears to last about 10 days or so without freezing. If you freeze it, it could last weeks even months. They send it with those little packets that keep the food cold and it was sealed pretty good. Reheating was super easy, 2 to 3 minutes and then its a matter of eating up. You can heat it right in the original container and they even said I could leave the label on there as it sticks pretty damn good. I think this process was very simple, straightforward and overall satisfying. One of my buddies said that its better this way because I can then flavor it how I want. But I don’t want to work, I’m paying for the simplicity of it and I want to feel like I’m eating not only healthy, but something mind blowing. I’m still pretty full from last night’s meal which was pretty good. My problem is that I can make something that is “okay” myself. I want to be floored by the flavor.

Therein lies the question though, have they sacrificed some flavor in favor of health, or could it be done better? That’s the part I’m not sure of. Here’s my final thought on this, if you have the money for it, I think it’s worth trying. I think I’m gonna try a few more meals and see how I feel. However, I’m starting to realize that despite my crappy cooking, preparing my own stuff may be my best option in terms of cost. I’m just gonna have to put in some more work and learn how not to overcook my meats. But I’ll try some meals again and see how I feel. For the rest of this week I have only the meats as I bought a bunch of them. My son and I will devour them in no time.

For the time being I’ve decided to stick with Trifecta. I was flirting with a few other services, simply to try them, but I’m happy with these guys. Also, I came across this statement which really reinforces my prior statements about the flavoring points I made:

All a la carte proteins come in 4oz portions in the container size you order. Everything is lightly seasoned with no added oils or butters, so you can add your own seasoning/sauces. All proteins and vegetables are baked while the carbs are steamed.

It is clean food, and if you want extra flavor, they give you the option to add rather than put it in by default. This makes a lot of sense to me and as such I’ve decided to go for another round. I put in my order today for next week. If necessary, I’ll provide further updates. Again, I must reiterate that their customer service is second to none. Whoever runs that aspect of the business has done a great job with the team.

So as of yesterday, July 24th 2019 I have cancelled my subscription with Trifecta.

First thing that happened was the food arrived a day late. I understand that things happen and delays can be expected, but when it comes to a perishable item like food, during a terrible heatwave week, then that’s not a very good thing. I’m not sure who messed up or what happened, but this was not good. I spoke to their support, and I didn’t really feel that they had an appreciation for how hot it was that week.

So I received the meat on a Saturday and was told that if it was warm or bad, they’d just ship me a new batch that week. I was a bit frustrated because I really plan my training and eating down to the day. This threw me off, but it wasn’t enough to get me to leave. The food didn’t feel cold, but it wasn’t hot either. I thought I’d take a chance with it.

So the last few days, I’ve been eating the food, and the chicken was giving me some serious poop action. I reached out to the staff again and told them. I explained to the rep that I couldn’t eat the chicken as I felt it was making me sick. I felt that he was relatively dismissive and didn’t appreciate the discomfort I was in. It was a far cry from my experience with their customer service before.

In any case, my objective was to stop the next shipment of chicken from coming. I called what I believe was early enough to intercept the shipment, but according to the gentleman, it was too late. I expressed that the problems it caused me would prevent me from eating the chicken again, and that I didn’t want it. Again, he reiterated that it was too late to stop it. In fairness to them, I know there are moving parts in this process, but even the attitude towards my concerns didn’t feel right. I felt that he was just being kind of dismissive.

Naturally, I started to get pissed off. So, instead of just addressing the matter in a way that both sides would be satisfied, I felt that the end result was, “It’s too late to do anything, deal with it.” This was not acceptable, so I simply said, “Okay, I’d like to go ahead and cancel my service please.” I also said “I don’t want the chicken, it made me sick, so we have to do something with that. Stop the shipment, because I’m not going to eat it and I’m not going to burn my money like this by discarding it after paying for it.”

In any case, long story long, we cancelled my account, I got a full refund for the meat that arrived late during the heatwave, and I got a refund for the chicken portion of the last order that will arrive tomorrow. Understand this, I was not trying to get money from them, I was not trying to hurt them, and I didn’t want to cancel the service. I just wanted my concerns addressed. However, the dude pissed me off, and this lead us down this path.

So here’s the end result, I cancelled, I got my money back, and at the end of the day, the meat is still coming. From a business perspective, would it not have been better to just replace my chicken with some beef, however it was done, simply send me beef, cancel the Fedex, or whatever it took to address my concerns? I’m sure they could do something out of the normal process like that because they had said before that they could send me replacement food if the heatwave batch was bad. So I knew that there were some more flexible things that could have been done. But instead, this dude created a poor customer experience, ticked me off, cost the company money in refunds, gave me the food anyway, and lost a potential long time loyal customer. I eat lots of food everyday, so providing food for someone like me is a guaranteed way to keep money coming in! I just wanted some appreciation for the fact that my backside was on fire from the chicken.

Come on now guys! Your customer service started amazingly, but apparently deteriorated. I guess this is a growing experience for your staff? I don’t know. I’m here and accessible if you would like to discuss or followup.