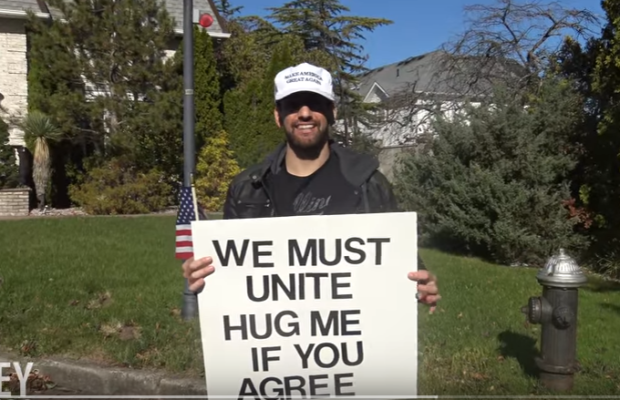 Joey Salads is a well known youtuber, as you’ll see in this video, he’s willing to put his butt on the line to create unity and drive a point home.

I have always maintained that not all Trump supporters are racist or bigoted people. Some of them absolutely are, you’ve seen some of the things that I have been told by some. However, many are not.

His attempt in this video was to say that we are all Americans, and though some individuals were not happy that a Trump supporter was there, many of them were willing to put aside their political differences and give him a hug.

This was a risky thing to do by himself, and you gotta admire the pair that this guy has. However, I found the video touching, especially when I saw the children take a flag and give him a hug.

We have to come together as a country, or like I have said several times over, we will be the next Roman Empire, once great, now fallen.

FacebookTwitter
Related ItemsLet's Talk
← Previous Story PhD Student Tackled By Police For Stealing His Own Car
Next Story → When Our Leaders Hate Our Police: Mayor Eula Clarke And Her Pig Commentary