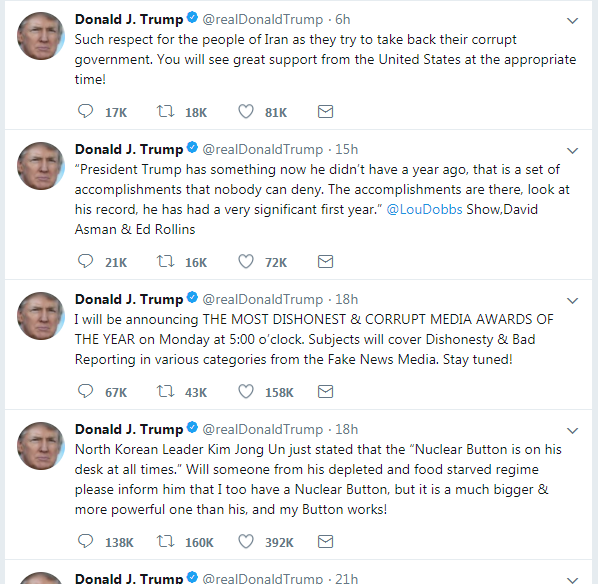 It’s been said before,  but it bears repeating. Donald Trump, the 45th President of the United States legit thinks that he’s on a reality tv show. Should you have any doubt about this, simply look at his most recent tweets. Let’s go ahead and examine Trump’s insane tweets of the last few HOURS.

Such respect for the people of Iran as they try to take back their corrupt government. You will see great support from the United States at the appropriate time!

Respect another country and their people for speaking up against a corrupt government. However, if you speak up against his, they throw your ass out of the event, you get punched by an old man, and he dismisses you as a loon! Trump is hypocrisy at its finest. “President Trump has something now he didn’t have a year ago, that is a set of accomplishments that nobody can deny. The accomplishments are there, look at his record, he has had a very significant first year.” @LouDobbs Show,David Asman & Ed Rollins

Trump as is often the case, tooting his own horn.

I will be announcing THE MOST DISHONEST & CORRUPT MEDIA AWARDS OF THE YEAR on Monday at 5:00 o’clock. Subjects will cover Dishonesty & Bad Reporting in various categories from the Fake News Media. Stay tuned!

Making an awards show out of what he calls dishonest media. Seriously, Trump? You are a damn clown brother, and your behavior does not align with that of a great leader. Focus on your job instead of pooling our resources to plan a stupid ass awards show. Buffoon!

North Korean Leader Kim Jong Un just stated that the “Nuclear Button is on his desk at all times.” Will someone from his depleted and food starved regime please inform him that I too have a Nuclear Button, but it is a much bigger & more powerful one than his, and my Button works!

Talking shit, and a nuclear pissing contest with yet another psychopath from the other side of the world. This one goes beyond stupid as it can end in a nuclear war where we all die. Though I assure you, Trump will be well hidden somewhere while we and our children die first.

Democrats are doing nothing for DACA – just interested in politics. DACA activists and Hispanics will go hard against Dems, will start “falling in love” with Republicans and their President! We are about RESULTS.

Did I entirely miss something here? What has Trump done for DACA? I’m extremely confused?

I could go on for days, but you get my point, dude is insane.