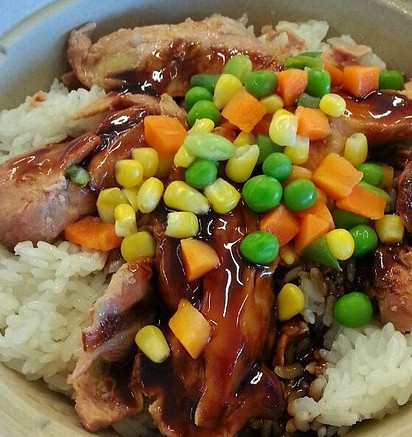 There were a few places to choose from to eat at the airport in San Francisco. On the way back from our trip, we ate our brunch at “The Plant Cafe Organic,” and got something to go for the flight at Wakabe Sushi and Noodle. I went with the teriyaki bowl, I love sushi, but I think you’d have to be severely brain damaged to order sushi from an airport fast food restaurant.

The teriyaki bowl was pretty large, it was enough for my wife and I both to eat, and there was still some food leftover. These guys were not cheap with the chicken, I give them that. But that’s all I’m going to give them.

So the dish is basically some white rice, sliced chicken drenched in teriyaki sauce, and what appeared to me as vegetables straight out of the green Del Monte can. Seriously, it was actually humorous to me. Eating this meal felt like when I was in the field in the military. You didn’t want to eat it, you didn’t like it, but you ate enough of it to survive and get you through the battle. In this case, it was just enough to get us through the flight. Mind you, we didn’t finish it, I’m sure that this was not because we were full. When you have places like The Plant Organic Cafe available, there should be no reason that you subject yourself to food like this. The lesson was learned. Unless this was the only restaurant that was open, and I was totally starving, I’d probably never eat here again. I realize I haven’t told you much about the dish, but what is there to tell? I put up a freaking picture of a green del monte veggie can to describe part of the dish! That should totally make the point! Think of a bowl with white rice, sprinkle a few of these mixed veggies on top of it, put in some chicken and drench in some sticky, messy teriyaki sauce. Taste was just blah, that’s all this is. Meh.

[…] a place like this jumps out for us. We both had Quinoa bowls, and unlike the bowls that we had at Wakabe, these bowls were actually pretty damn good. I had the bowl with chicken and vegetables. Hmmm. […]