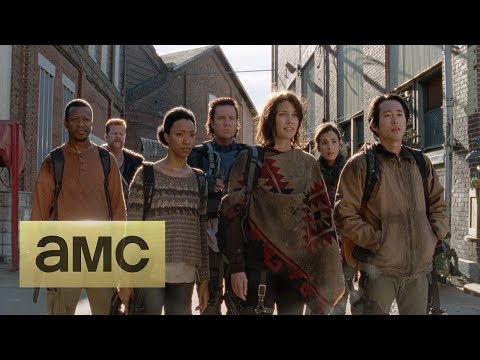 Damn homie, you’s a dead mother brother now! LOL. It would appear that this bearded fella chose the wrong person as an enemy in Darryl. See Darryl’s been through the ringer, he’s tough, but he’s also not stupid. He knows that he’s somewhat safe with this new group of rogue guys, but at the same time, he knows that they could kill him at the drop of a dime. As such, he abides by the rules, and keeps his cool. This other guy was just hell bent on causing trouble for Darryl, at the end of the day he done screwed himself real good like didn’t he?

Now how lucky was Glenn and his new friend? Seriously, wasn’t that rescue just way too convenient? I hate overdrawn drama, but sometimes miraculous things like this rescue are just a bit too full of the caca!  “Get down!” Come on!!!

Now what about this Terminus place? Call me crazy, but something feels awfully wrong about this place to me. That woman looks creepy as all heck, there are no locks, no security, and she’s kind of just chilling there by herself? Sanctuary for all? Come on now! You know something is going on there, something’s got to give. I don’t know what it is yet, but you know what I’m saying! Am I right? Eh? Eh?

You know the saying, it’s a small world? Well, isn’t it? Now these rogue guys are looking for Rick? Seriously? I hate how coincidentally everything just ties together and everyone crosses paths. Also, why didn’t Rick kill the guy who saw him? Stupid, I said it before, you can’t be in the zombie apocalypse and not kill. Now they are after him! See what I’m saying? If this show were more realistic, Rick would already be dead. His kind heart, and nice manner have caused problems for many on more than one occasion. It’s time to start unceremoniously killing people!

I wanted to read more of the story so I picked up the comic again, but the path is different enough that it’s pointless to try and pick up where they left off. So it would appear that I have no choice but to sit around and wait for next week, and then next season. Meh!

What do you guys think about this Terminus place?

I think I may need to watch this episode again… but I only saw Rick once during this episode. I am so lost… what are you referring to with Rick. I only remember him when he was walking with Carl, and Michonne.

Remember towards the end, Darryl’s crew said “We are looking for this guy that was in a house, and he killed one of our guys?” That’s Rick they are looking for. Remember he was hiding under the bed when those guys came into the house? That one guy saw him under the bed while the other guy choked him out. Then Rick killed the other guy who was in the toilet and escaped out a window.