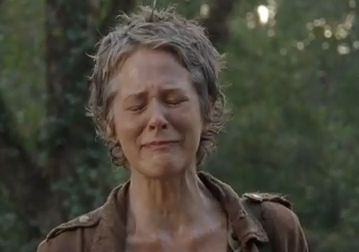 What kind of person would you be during the zombie apocalypse? Yesterday as I watched my dvr’d episode of this Sundays “The Walking Dead,” I was livid.

Okay, if you haven’t watched this episode, stop reading now. I’m about to begin some serious spoiler action. I’ll also reference past episodes, so if you are not up to speed, stop now. You have been warned.

Back to my first question, what kind of person would you be during the zombie apocalypse? Would you be like Rick? Rick is a good, honorable man. He always tries to do the right thing. I respect a man like Rick, but his actions have cost many lives. The most-recent hesitation cost them an amazing, fortified location, the prison. Honestly, I would have killed him long before this showdown ever came to be, but I’m focusing on the most-recent events. The governor is a problem that should have been solved long ago.

On that note, would you be like the governor? He was a greedy, ruthless, manipulating, evil man. His actions not only cost him his own life, but the lives of many innocent, gullible, good people. His own people should have recognized him for what he was, but was he wrong? Survival of the fittest right? He had a good thing going in Woodbury, and that went to poop because of his imperialistic ways. But is he right? I think the governor went a bit too far in his evil ways, but I get where he’s coming from. I think that this current incarnation of Carol is closest to what I’d be like, a good person that can and will kill to ensure not only my own survival, but the survival of my group. It took her sometime to adapt, if you recall early on in the series, Carol was very weak. However, adapt she did, very well in fact.

During Sunday’s episode, Lizzie, one of the little girls demonstrated that she had some serious mental and emotional issues. Her issues continually compromised the group since the days that they were living in the prison. It was not until yesterday though that her issues became glaringly apparent.

The small group realized it, her love for and the defending of the walkers was bizarre, and even worse than Hershel’s was early on. She was an emotional wreck, and when she freaked out on Carol, that was when the decision to take her out should have happened. They should have known that she posed a danger to herself, and everyone else. First of all, she was out there playing with a walker, that should have demonstrated her inability to think properly. Second, she went berserk on Carol when she saved her life. However instead of taking action, Carol hesitated. She wanted to help her. Carol thought she could fix her. So what happened? Lizzie killed her sister Mika! Now the useful child is dead, Mika, the smart one that could kill and contribute value to the group. She’s gone, murdered by her own neurotic sister, and Lizzie was about to slaughter the baby too! Are you kidding me? Let’s not even get into my feelings about baby Judith. That’s a whole other story. There is no place for an infant in the zombie apocalypse, but she’s already here, so you have to take care of her.

Carol is usually on point, but she dropped the ball on this one. She realized what had to be done, but she realized it took late. They lost the home and the girls. Damn shame! Also, telling Tyreese about burning those two? Not the smartest thing to do, swallow the guilt, and move on. It’s the end of the world anyway! No room for conscience, guilt, or none of that crap. Just look at the flowers.

The Walking Dead. Look at the flowers. http://t.co/hZsJkGhqIM

@moha_doha Here is a piece I wrote about surviving during the zombie apocalypse. http://t.co/DY8JWdBh1c #thewalkingdead