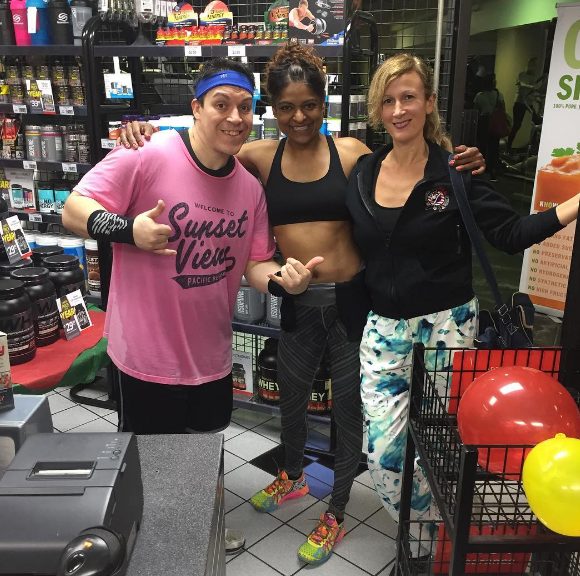 Allow me to explain how and why your warm up sets the tone in group exercise! Yesterday I was once again confronted by a sea of unknown faces at a new gym. I showed up expecting to recognize at least some of the people from two weeks ago, but this was an entirely new bunch. I only saw one familiar face in the crowd, and a friend of mine who came to take the class.

Do you know what that means? It means that once again I would have to prove myself to an entirely new bunch. When they saw me start setting up, the protesting immediately began…

We have a sub? How come no one told us? Who are you and where are you from? We’ve never seen you before! ARE YOU ANY GOOD? this sucks, i’m leaving.

At that point, I saw a couple of them heading towards the door, making to leave the group exercise room. So I played some big band music, they turned around and looked at me like I was crazy! I winked at them, and then I said who I was, and that I was subbing for Lynn, and then I asked them if they were ready for all this? Give me a chance, if I suck, then leave!

Those first few minutes are crucial to setting the tone of the class. I spent hours searching and listening to mix after mix after mix trying to find my perfect warm up song. DJ Baddmixx provided that for me!

Right from the beginning, I start to build up energy and excitement, “Clap your hands everybody, clap your hands to the beat!” Straight from the gate I get them engaged, moving, hyped, and energized. Then I shift into some stretching, and back to claps. After that I take them through the various stages, and by the end, they have broken a sweat, and all of them were saying, “Wow, that was intense but awesome!” At that point, they are mine!

So people, especially those of you who are teaching Zumba, know that the warm up is critical to setting the tone! It is especially important when you are subbing a class and some of the members are on the fence about whether or not to leave. That is your opportunity to convert them to supporters. Make it count!

Put time and effort into your warm up, be it for Zumba or any other format. Also, make sure you bring the energy, intensity, and good vibes! You must exude energy and good vibes, this is also very important! The members will come to appreciate and love your for it!

When I first walked into this new group, I damn near had a mob mentality uprising in my hands. By the end of the class, everyone wanted to know if I was coming back the next day. A member from management approached me and said, “That was one of the best classes I’ve seen to date, you rocked it dude!” And that ladies and gentlemen, would not have been achieved without my kick ass warm up!

Take it from your new Zumba and Group Fitness buddy, your warm up will set the tone for your entire class! So make it really, really good!