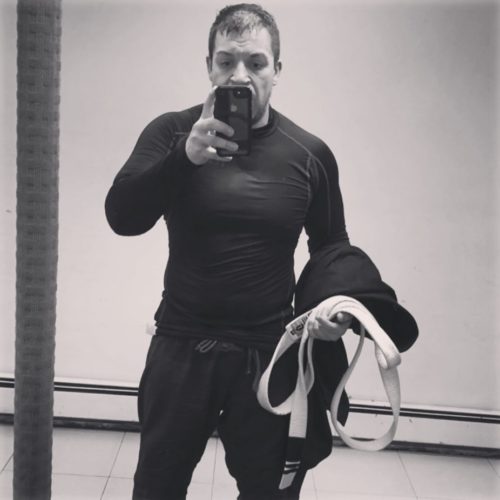 It was an early morning class, I noticed the new guy, he seemed timid, but really big and strong. Coach comes over and says, “Go easy on him, he’s new.” So respectfully, when we started sparring, I gave him the power position and didn’t really resist him getting side control and then getting the mount. That’s when I realized that this “new” kid was a damned beast. He wasn’t skilled per se, but he was strong and crushing my damn face into the ground, I guess coach forgot to tell him to go easy on me. LOL. That was our first encounter.

Some days later I was rolling with this same young white belt. As I mentioned, he was a very big and powerful boy. So this time, I gave him what he gave me. I brought the heat cause I already knew what he was about.

At one point as I tried to sweep him, his weight was too much and he managed to take my back. At the time I wasn’t too worried because he didn’t appear to go for my neck yet. But moments later I felt his legs squeeze around my waist and he started to twist them towards the right. Next I felt his arms squeeze around my chest and he started to twist them towards the left. Finally, I felt him trying to raise his hips as he twisted my back in opposite directions.

Realizing that this fool was about to snap my damn spine I tapped. Next I asked him “What the hell are you doing bro?” He said “That’s a submission, people tap to that.” I replied “If I bite your nuts, I bet you’d tap to that too man, it doesn’t mean we do it here. Especially in such an unpredictable scenario like a live roll. You have to be careful with your training partners man, that’s some dangerous stuff you are pulling.”

My man didn’t like the fact that I was riding him about that, but I don’t think he quite understood the danger and risk that was involved in his crazy Iron Sheik WWF submission attempt that he probably saw on YouTube. What the hell bro?

I am noticing that though most people in BJJ are cool, not all of them are particularly careful with the safety and well being of their training partners. I’m not saying that they are intentionally trying to hurt you, but I think that many are careless or unaware of the dangers involved. Especially at the lower levels with newer guys. I’ve been hurt pretty badly by new guys throughout the years.

Fortunately, I didn’t get hurt too badly by this guy. He did the attack a bit more slowly since he’s such a big dude and he was still trying to figure out the mechanics. However, if he had cranked that faster, I would have been hurt badly without a chance to tap.

My friends, when you are rolling and training, please be very careful with how you attack your partner’s, especially the neck and spine. Winning at a casual school roll isn’t so important that you have to injure someone badly to do so. Please, respectfully, don’t be a fucking idiot.