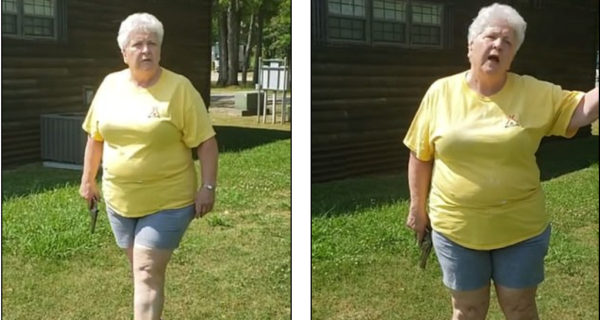 I’m going to try really hard to just focus on the facts at hand and not resort to any personal insults around this story. I’m finding it really hard because of the level of disgust I feel when looking at this woman. As I watched the video, it looks to me like she’s showing up and trying to establish dominance with her firearm, when they comply, it looks like she’s thinking to herself, “that’s right, I’m in charge, obey me!”

So a black couple was looking for a place to hang and visited a lake with their dog. This lake was at a camp ground where I am not entirely clear if the public is allowed or not. However, for all intents and purposes, whether or not it was private property is irrelevant.

Why do I say that? Well, this woman here, she came to this man, his lady, and their dog with a gun at hand to demand that they leave the property. The campground owners do not condone this behavior and the woman has since then being fired from the job. Thankfully no one was hurt during the encounter.

Here’s my problem, first and foremost, why did this woman show up to talk to them with a gun drawn? It is my understanding as a legal gun owner that one never draws their weapon unless they intend to fire it, and one never intends to fire it unless their life is in danger. But this woman had her weapon drawn, her finger on the trigger, and threatened these people when there was no threat from their end at all. Why? I think we all know why, but let’s leave that out of it for the time being.

Why is this woman not banned from owning a firearm anymore, and why is she not behind bars? She broke a major rule when it comes to firearm ownership. She brandished her weapon when there was no threat to her life. She was clearly a danger to these folks and why? Legal gun owners should know better than to pull a gun without cause. This should be the case in general, but especially in today’s atmosphere where black folks are gunned down so easily.

What if he was carrying and shot her first? Do you think the cops and legal system would understand him fearing for his life? Or would that story go differently? She was a threat to them, and he had no idea what her intent was. In my opinion he had a right to shoot her in self defense. She had no cause to draw her firearm because there was no threat to her life.

Also, it should be stated, and I left this for last intentionally, the man is a war time combat veteran. His words were, I didn’t get shot overseas, but I come home and find greater danger during a holiday weekend for deceased soldiers while on a campground with my wife and dog. This is completely unbelievable. This is how some white Americans treat our citizens and veterans if they are the wrong skin color.

This woman 100% deserved to be fired. She should no longer have gun rights and she should be charged with menacing, endangerment and brandishing a firearm without just cause. The only thing that would have made me happy during this video was if her dumb ass shot herself in the foot while putting the gun in her pants. That would have been instant justice and karma.

Please share this and lets try to get this woman the punishment she deserves. She didn’t shoot them because they were very calm and handled this well. But why is it on us minorities to handle things well every time some damn coward pulls a gun on us?