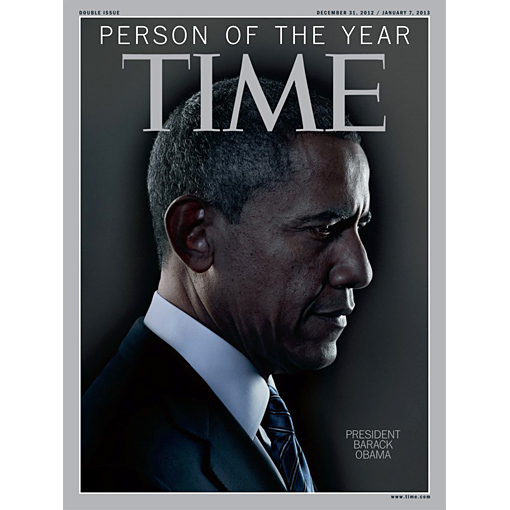 Before any of you race baiters come out and start accusing me of hating Obama because he’s black and making all those other baseless accusations, let it be known, I voted for Obama, I like him. So stop it.

The reason that I state that Obama shouldn’t be the person of the year is because there are so many people out there that have done so much more than him on a real street level.  For instance, the soldiers that go out there and risk their lives to protect our way of life, some never coming back.  What about the teachers that gave their lives to protect the innocent children at Sandy Hook? I mean these people DIED PROTECTING INNOCENT CHILDREN!  What about the heroes of Hurricane Sandy? What about the first responders during 9/11 or even during Sandy hook? These are people that have effected real change, from the ground up. They are doing things on a molecular level for this country. Think about it, a teacher died saving her kids. WTF man? If that’s not worthy of some magazine “Person of the year” title, I don’t know what the hell is!

Obama announced his support for gay marriage, and he’s working on the immigration situation, and those are all great things, I’m glad that he supports helping people that deserve it.  I’m not discrediting or downplaying his work. He is trying to do big things. But again, there are others that have done so much and should be recognized!  What about Daniel Inouye?  A man that received the medal of honor, purples hearts, and was up until his death recently the longest standing senator?  This man was a world war II hero! Missing an arm that he lost while in service he left his idea to become a surgeon and began to study politics.  Even the president has honored this man.  So why not Time magazine? Why didn’t I even know about him until he died? (Someone pointed out in a thread that they bet I never heard of him, this is true, why is that though? Is that my fault?)

Look, I’m not on here bashing Obama, I have done so in the past, and I believe it was well deserved, however I’m not doing so now. I’m just saying that Time magazine should consider people like the ones I mentioned, real American heroes. I have no idea how people are selected, or who even votes, but I bet it’s like the ones that vote at the Grammys and other ridiculous awards show. Nice title to earn, but usually goes to the wrong person. In fact, after doing a little more research Time has picked people a lot worse than Obama -> Hitler, Stalin, Ayatollah Khomeini. So, who runs those votes?

Hi Time magazine, I’m not comparing President Obama to these men at all. I may not know everything that is going on behind the scenes with your votes and so on, but I think you guys are doing it wrong! who really cares……we have other pressing issues.

Indeed, such as some that I mention in the article. 🙂

Late night call — How many Boricuas are up this late?

I’m not a fan of Obama, and I don’t think he should be “Times Person of the year,” but I can’t say I’m surprised. Time has picked people a lot worse than Obama -> Hilter, Stalin, Ayatollah Khomeini….

not even going to read it. sure there are probably people who are more deserving to get it. but this is simply a fad. almost every president that was elected/re-elected, had won person of the year, the year they won

No need to read Bramon, bottom line: a teacher that takes a bullet protecting kids, person of the year.

It’s not an award like the medal of honor, nor is it a title to given to an amazing human being. It’s a magazine issue about a person who “for better or for worse, …has done the most to influence the events of the year.” I’m not saying anyone’s opinion is wrong, I’m saying let’s first understand what it means to be “Person of the Year” before we start blaming the President for something he has absolutely no control over.

what she did was honorable, but that’s about it. i’m not taking anything away from here either. why not give the girl in pakistan who was shot by the taliban for standing up for her right to education and to help progress a authoritarian theocratic government, and the shitty location in general. that’s progressive.